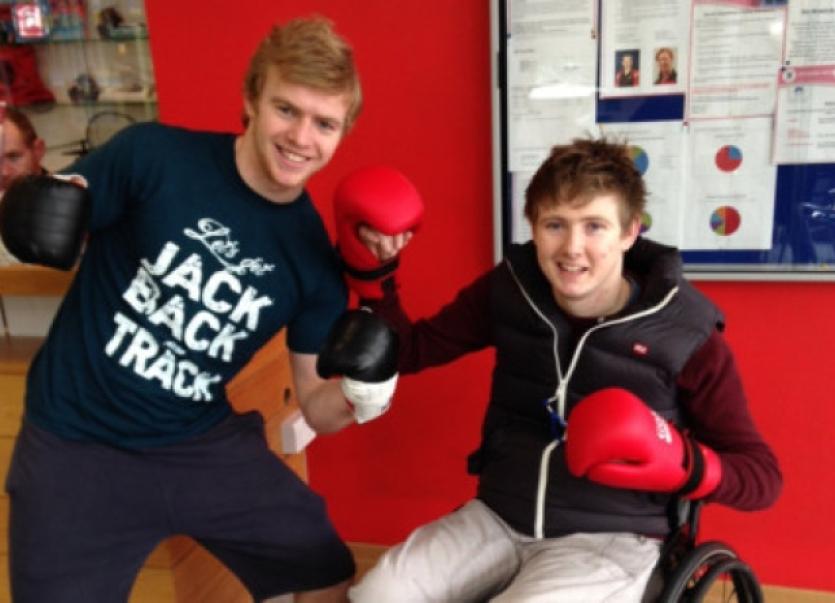 LIMERICK student Billy Glynn is to knuckle down and get in the ring this Friday to help raise funds for a friend who has been left paralysed by a freak swimming accident.

LIMERICK student Billy Glynn is to knuckle down and get in the ring this Friday to help raise funds for a friend who has been left paralysed by a freak swimming accident.

Jack Kavanagh, 21, was on holidays in the Algarve with a group of friends when his life changed forever in August 2012.

“He was just diving into the water when he hit a sandbank and broke his neck. It was in the middle of the day so there wasn’t any drinking or any messing involved,” said Billy.

An accident in the water was the last thing friends would have expected from Jack Kavanagh. A strong swimmer, he had spent most of the summer of 2012 working as a lifeguard and windsurfing instructor.

“He suffered very severe spinal injuries and had to be taken by helicopter to a hospital in Lisbon. He was in Dun Laoghaire (National Rehabilitation Centre) for a good while and he has slowly but surely been getting better - but it’s a long road,” said Billy, from Shelbourne Road.

The young Limerick man has also played for Blackrock and more recently with Trinity College, where Billy is in the final year of a law degree and Jack continues to study pharmacy in spite of his injuries.

A cruciate ligament injury has meant no rugby for Billy for the past year but he realises just how fortunate he is to have his health.

“When I met Jack after my own injury I was on crutches and he was in a wheelchair so that really put my setback in perspective,” says Billy.

This Friday night sees Billy return to competitive action of a sort as around 30 friends and supporters take part in a white collar boxing fundraiser for Jack at the Dandelion Club on Stephen’s Green.

“We have been getting two training sessions a week in the National Boxing Stadium near Harold’s Cross so we’re all looking forward to it,” said Billy.

All monies raised go towards the Jack Kavanagh Trust, set up last year to help cover his continuing rehabilitation and care.

“He is somebody we’re told that no insurer will touch and it’s estimated that it will cost somewhere in the region of €3 million over his lifetime to care for him,” said Billy.

The trust is funding carer assistance, physiotherapy and the purchase of specialist equipment to get him through university and lead as normal a life as possible.

Donations can be made to the Jack Kavanagh Fund account at Bank of Ireland, Main Street, Dunshaughlin, County Meath (Account number 22317025, Sort Code: 903437).