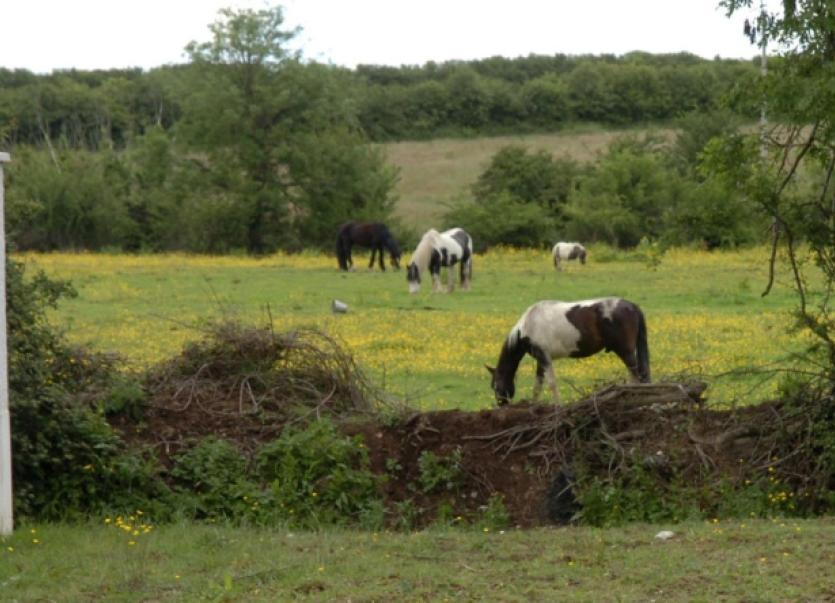 FRESH calls have been made for tighter animal control bylaws after a number of horses that were illegally grazing on county council land in Newcastle West were impounded.

FRESH calls have been made for tighter animal control bylaws after a number of horses that were illegally grazing on county council land in Newcastle West were impounded.

The issue of horses grazing on a site near the Sycamore Crescent estate has re-emerged after five animals had to be removed from a seven-acre plot which had previously housed horses taken from other local housing estates.

Horses are no longer permitted on the property following concerns about its security and suitability.

Cllr Damien Riedy has now called for tighter bylaws that will prevent people from putting undocumented animals out to graze on public land.

“This has been one of the main issues that has been raised with me at the doorsteps, no one seems to know who owns the animals grazing on council lands and if there was an incident, who would be responsible? Proper safeguards need to be put in place to protect the animals and the general public.

“The council must ensure that any lands that are to be used for the grazing are fit for that purpose. There would also be an onus on the county council to ensure that the animal owners have all the proper documentation.”

Cllr Riedy said that an existing council bylaw regarding animal control does exist, but is “archaic” and needs to be updated. The issue of animal grazing on public lands in the Newcastle West urban area has been raised on a number of occasions over the past twelve months. The council owns two sites in the area that it typically subleases for grazing purposes. However when no lease could be secured for the Gortboy property, the council used the site to store horses that were removed from local housing estates.

Over time a number of private individuals began to put animals out to graze on this land, leading to concerns about the risk of animals breaking out and the site’s general suitability.

Cllr Riedy said that the original arrangement to allow horses to graze there has since ended, and a sign has since been erected at the entrance warning people that the land can no longer be used for grazing. However Cllr Riedy said that some animals are still placed on the land, and the council has accepted that “it would take some time to get the message across”. Five horses illegally put on the property have been impounded in the past week.

Cllr Riedy said that the idea of keeping horses out of housing estates and putting them in designated grazing areas should be supported, provided the sites are suitable.

“The idea in principle to take animals off housing estates is good. But finding an adequate site is still important. The land has to be suitable; it needs to have proper fencing and a suitable entrance and exit. I do support that council on this project, but I’m very cautious about where they want to put it.”