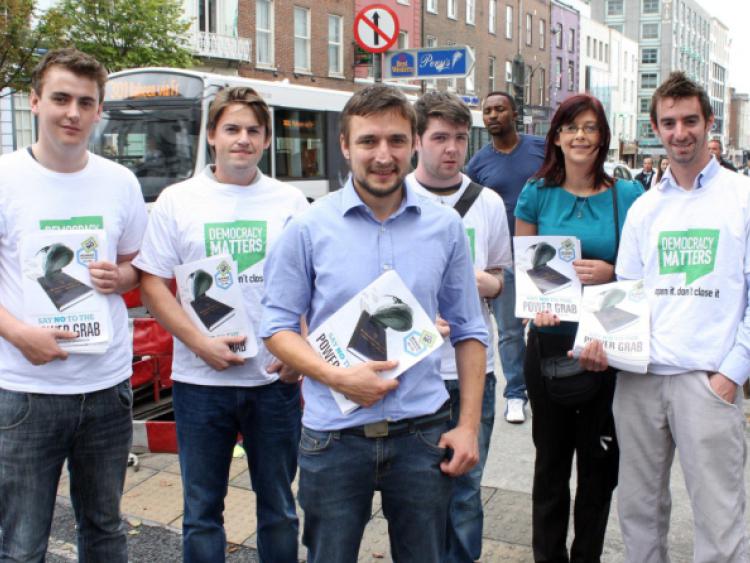 “NOBODY is arguing in favour of retaining the Seanad in its present form,” Limerick’s only senator James Heffernan has said on the eve of this Friday’s referendum on the future of the Upper House.

“NOBODY is arguing in favour of retaining the Seanad in its present form,” Limerick’s only senator James Heffernan has said on the eve of this Friday’s referendum on the future of the Upper House.

The electorate was being presented with the “wrong question” and the strengthening of the Seanad is what ought to be on the government agenda. Senator Heffernan is advocating a No vote to stop the creeping centralisation of power in the executive, he said.

Elected as a Labour member, Senator Heffernan lost the whip over his opposition to the social welfare bill and has been himself a victim of what critics say is an autocratic approach by the government to dissent. He has lost speaking rights and his seat on the Oireachtas committee of European Affairs.

“I feel that the way the referendum has been put before the people by the Yes side has been misleading with a lot of misinformation and distorted facts and figures over costs,” he said.

Shannon-based senator Tony Mulcahy went even further last week, accusing his Fine Gael colleagues of “lying” when maintaining €20 million a year would be saved through abolition.

“The way it is currently structured, the government will always have a majority,” Senator Heffernan said in arguing for reform over abolition.

“I would favour the franchise for the university seats being extended to all university graduates including UL. And those other seats for the vocational panels should be open to all the electorate including people into the north and people who have emigrated,” he said.

“It is very worrying the way government is being run now with power being concentrated not only in the four ministers (the Economic Management Council) but in the hands of faceless advisors behind them who are accountable to nobody.”

“Taking away the critical voice of the Seanad in those circumstances is dangerous for democracy and people are concerned about that. It is time for people to stand up and give Enda Kenny a bloody nose,” he declared.

His former Labour colleague Minister of State Jan O’Sullivan said her experience of the Seanad, where she served for four years, made her “realise just how limited the its powers are”. And the institution was fundamentally undemocratic.

This the government was committed to in reforming the Dail and strengthening local government. A new local government bill would shortly come before the Dail that would “give more powers to councillors and rebalance the role of the elected members relative to the executive”.

But Fianna Fail’s Deputy Niall Collins, who is director of elections as his party campaigns for a No vote, said the government’s commitment to political reform was bogus.

What was being proposed on Friday, he said, was “a blatant power grab by a government with the largest majority in the history of the state”.

“If there is anything we have learned from the past, it’s the need for much greater scrutiny within the political system. Instead of radically improving the system of checks and balances, this government wants to remove it entirely so that all the control remains in the hands of ministers,” said Deputy Collins.

“The refusal to include an option on reform in Friday’s referendum shows just how arrogant and out of touch this government has become. If the Seanad is abolished, it will be too late reform it. An already too powerful government will cement its absolute control over our parliament. It will be too late to introduce the kind of reform that ensures we have an upper house that holds ministers to account and scrutinises legislation on behalf of the people.”

Another proposal that had gone under the radar illustrated the government’s intentions, Deputy Collins said. A Yes vote would scrap an article in the constitution - albeit one never exercised - allowing the President to put controversial laws before the people in a referendum.

Meanwhile former minister Des O’Malley has described the referendum debate as “a sideshow” - “a bit like the Seanad itself”.

In an article for the Irish Times, Mr O’Malley appeared to agree with those on the government side that in having a second chamber, Ireland was out-of-step with European countries of comparable size.

“Powerful second chambers merely slow down policy change. Japan, Italy and the US – countries with powerful upper houses – have seen policy sclerosis and legislative gridlock. Large countries can afford to move slowly since their size protects them. As a small open country, Ireland has to be faster to adapt. It is noteworthy that few of the small democracies in central and eastern Europe that re-emerged after the fall of communism chose to have a second chamber,” Mr O’Malley wrote.

His 34 years in the Dail had seen interminable debate about the role of the Upper House, none of which was acted upon. “If we reject this opportunity, there will be another raft of proposals for Seanad reform” which even if they were agreed “would make no real difference because the Upper House has no power”, Mr O’Malley said.