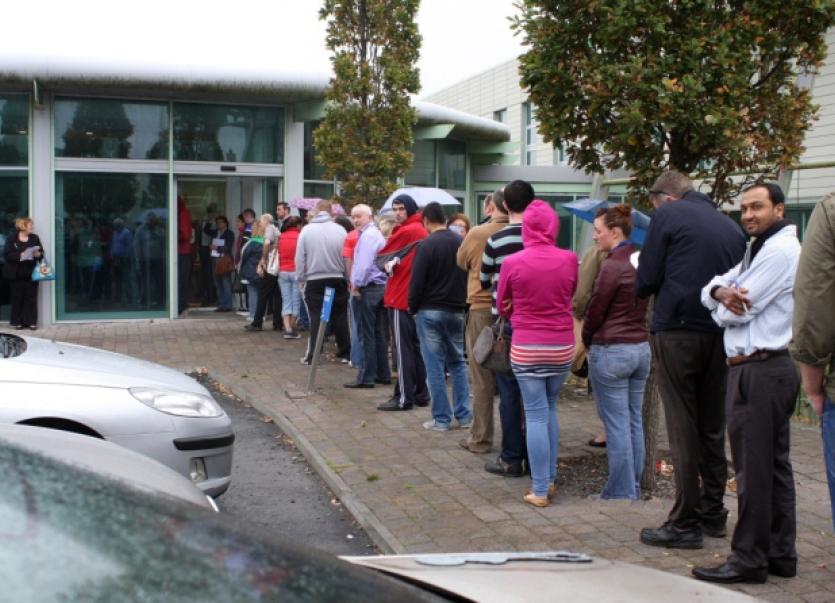 Common sense must prevail and the deadline extended on the new motor tax rules say the Irish Farmers Association.

Common sense must prevail and the deadline extended on the new motor tax rules say the Irish Farmers Association.

Thousands of Limerick motorists queued for hours on Monday to beat the closure of a tax loophole where they could declare their cars had been off the road.

It is understood that others who turned up on Tuesday were informed by council staff that they had missed the deadline and were now liable to pay motor tax arrears.

Council staff worked until 10pm on Monday night and clerical officers had to be redeployed to facilitate the “record numbers” attending the motor tax offices at City Hall, Lissanalta House in Dooradoyle and the district office in Newcastle West.

A staggering 1142 transactions were processed in person in County Limerick on Monday and 450 in Limerick city.

Staff walked along the lengthy queues and accepted and date stamped documents for later processing from a further 500 people at City Hall.

And another 2,000 people were dealt with in this fashion in Dooradoyle and Newcastle West.

It means well over 4,000 motorists attended the council offices on Monday.

“Postal bags have been received and are yet to be opened so the volumes are still increasing.

“Any postal applications received with a postmark of September 30, 2013 will be processed as compliant with the new procedures,” a council spokesperson said.

“These figures are in addition to the backlog that has built up over the prior few days - the staff have been dealing with similar volumes over the past two weeks - and have been working extended hours trying to deal with the additional pressure that has been placed on the system.”

The council thanked members of the public who endured long waits for their patience.

“Additional resources and processes were in place in anticipation of large numbers. Nonetheless, delays have been experienced by the hundreds of people who have presented in recent days. Limerick City and County Councils would like to thank the public for their patience and understanding,” said the spokesperson.

Changes introduced by Minister for the Environment, Phil Hogan mean people declaring their car is off the road will now have to notify their local authority in advance. The old system where motorists could retrospectively sign a declaration in a garda station that their car was off the road was criticised by many as open to abuse and was estimated to cost the Exchequer in the region of €55 million a year.

Motorists had until the close of business on Monday to notify the Motor Tax Office if their vehicle had been off the road and untaxed.

The new system requires the advance declaration that a vehicle is off the road and from Tuesday, October 1 it replaced the system whereby owners declare a vehicle off the road retrospectively when seeking to tax a vehicle.

Limerick IFA said farmers will be very disappointed if there is no extension to the transition period for the new motor tax rules, and again called on Minister Hogan to review the situation.

“We in the IFA highlighted the issues arising as a result of the change in legislation and had called for the deadline of the end of September to be extended to allow sufficient time for everybody to familiarise themselves with the new regulation, and for the over stretched administration to process applications,” said Limerick IFA chairman, Aidan Gleeson.

“An extension to cope with the motor tax backlog is necessary,” he concluded.

Frequently asked questions relating to the new legislation are available at the Motor Tax Offices in City Hall, Lissanalta House, Dooradoyle and Newcastle West or can be viewed online at www.lcc.ie