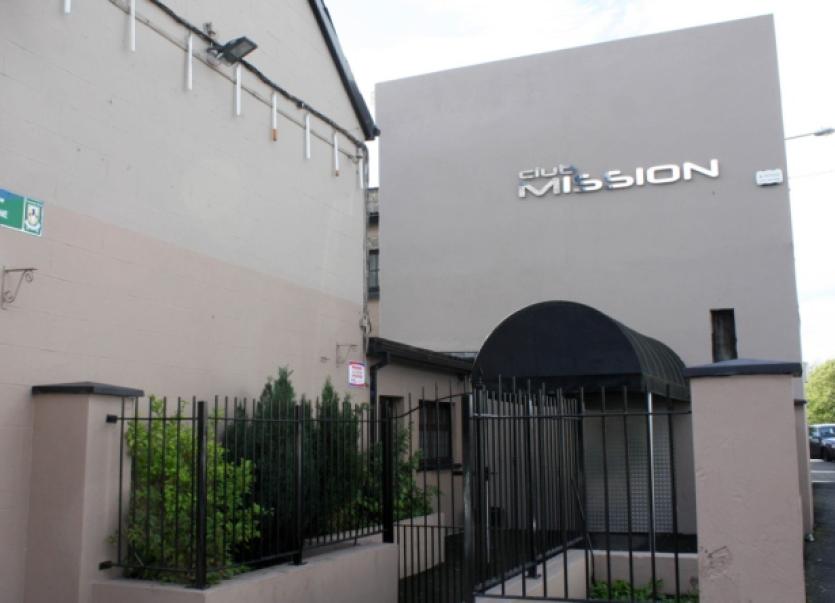 A JUDGE has threatened to withhold a licence from the owner of a Newcastle West nightclub over his refusal to co-operate with an injury claim brought against him by a woman who was hurt on his premises.

A JUDGE has threatened to withhold a licence from the owner of a Newcastle West nightclub over his refusal to co-operate with an injury claim brought against him by a woman who was hurt on his premises.

Well known local businessman Declan O’Grady, the proprietor of Club Mission nightclub on Church Street, was described in court as “certainly not a suitable character” to run the premises by the solicitor acting for Maureen McGrath, a woman who suffered a foot injury in the nightclub in April 2012 and has since brought a compensation claim.

Mr O’Grady admitted that he has refused on several occasions to provide details of his insurance to Ms McGrath, as he does not believe he is liable for her claim, and he also rejected a suggestion that he is unfit to run the nightclub. “I believe I am of fit character. I run a good shop. I totally refute here, in a public forum, that I am an unfit person to run this premises.”

Details of the ongoing legal dispute were made public at Newcastle West court last Thursday when Ms McGrath lodged a formal objection to the renewal of Mr O’Grady’s public dance licence for the nightclub.

Caitriona Dwane, acting for Ms McGrath, told the court that “isn’t a suitable person to hold a licence” as he has refused “on numerous occasions” to respond to solicitor’s request for details of his public liability insurance.

Ms McGrath told the court that on April 9 last year she was in the smoking area of the nightclub when another patron hit a punching bag machine, which was not secured to the floor. After being struck the steel base of the machine moved and landed “on top of my foot”. Ms McGrath said that “my foot swelled so bad, my fiancee had to carry me out”, and said that there was no proper first aid equipment available. “They had no ice… I was offered a bottle of beer to cool my foot.”

Ms McGrath said that after the accident her foot was in a cast for two weeks, and she had to take five months off from her work as a childcare professional. She said that as well as lost earnings, she has also incurred medical and physiotherapy bills.

Ms Dwane told the court that following her client’s accident, Mr O’Grady was sent three letters requesting details of his public liability insurance. He failed to respond to the first two, and in his reply to the third it was stated that Liam Lyons, the owner of the punching machine, would be handling any injury claim through his insurance.

However the court heard that Mr Lyons’ insurance company have since refused liability for the accident.

When asked by solicitor Kate Cussen, acting for Mr O’Grady, why she was objecting to the licence, Ms McGrath said “they’re not cooperating. I wanted something done about it. He doesn’t want to give me any compensation.”

Mr O’Grady, giving evidence, said that he has an agreement with Mr Lyons that any injury connected to the punching machine would be covered by his insurance. “I was under the clear instruction that [Mr Lyons] would deal with it. I felt my policy should not take a hit on that.”

Mr O’Grady added that if a claim was placed on his insurance “I would have incurred a huge increase in my premium”, and said that while resolving a claim “can take years”, he would be forced to pay higher premiums immediately.

Ms Dwane critcised Mr O’Grady’s stance. “You effectively decided you weren’t going to potentially take a hit and refused to inform your insurance company of the accident.”

Ms Cussen said that Ms McGrath’s objection “is not properly grounded” as an insurance matter cannot be used to determine an applicant’s character. Ms Cussen also told the court that Ms McGrath has admitted to going back to the nightclub since her accident, “thereby endorsing his character and licence”.

However Judge Mary Larkin criticised Mr O’Grady’s refusal to cooperate with Ms McGrath’s claim. “If you are not to blame, why do you have difficulty providing details of insurance? You will be clear if what you’re saying is true. You’ve decided ‘this is nothing to do with me, it’s somebody else’s problem’. You are not an insurance expert. This is a decision you are not qualified to make.”

The judge said that Mr O’Grady’s conduct was “quite extraordinary”, and warned Mr O’Grady that she will refuse to renew his licence until he provided his insurance details to Ms McGrath’s solicitors.

She adjourned a decision on the application until November 24.