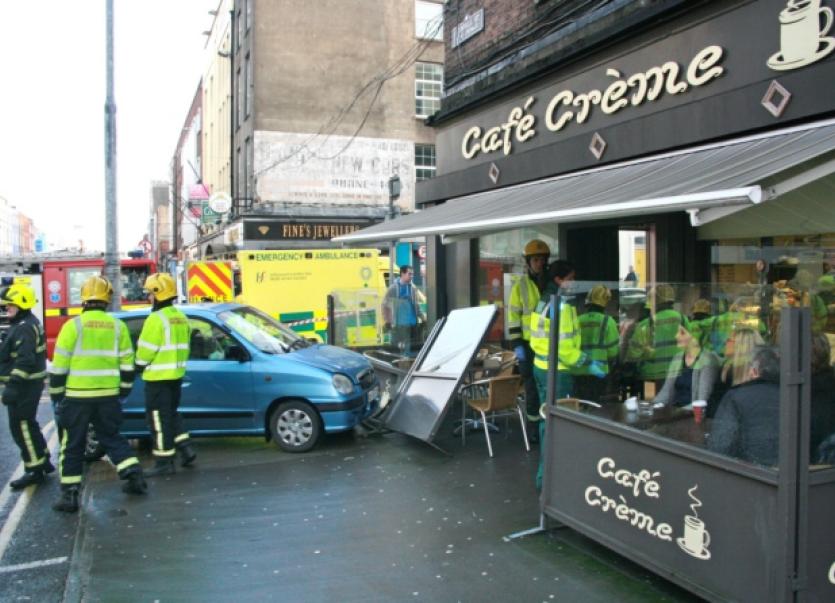 A JUDGE has remarked it was fortunate no customers were sitting outside a cafe in the city centre on the morning a woman crashed into the street furniture.

A JUDGE has remarked it was fortunate no customers were sitting outside a cafe in the city centre on the morning a woman crashed into the street furniture.

“It was like the bumpers in Lahinch,” one witness said of the driving of Blessing Bolatiwa, who pleaded not guilty at Limerick District Court to dangerous driving on January 19, 2012.

Ms Bolatiwa, 47, with an address in Finglas in Dublin but who previously lived in Limerick, had been attempting to cross O’Connell Street from Cecil Street when she collided with an oncoming vehicle and ended up crashing into a hoarding surrounding tables and chairs at Cafe Creme on the other side of the street. Ms Bolatiwa had been taken to hospital while the driver of the other vehicle was uninjured.

Garda Patrick Gleeson said he had taken statements from the second driver and from two men who had witnessed the accident.

Ms Bolatiwa, Garda Gleeson said, had declined to give a statement to gardai when invited to so do. This is something the accused vehemently denied, saying she had contacted the garda station on a number of occasions seeking to make a statement.

A civilian witness, Denis Carroll, described how Ms Bolatiwa had come through the junction at Cecil Street without stopping and “at a nice little bit of speed”. She had given the driver of the other car “no chance to stop”, according to Mr Carroll.

A second witness, Joe Flanagan, was in traffic when he saw a blue Hyundai being driven by Ms Bolatiwa switch lanes on three occasions on the short stretch of Cecil Street between Henry Street and O’Connell Street. She had cut off another car in front, Mr Flanagan said. She had attempted to cross O’Connell Street on the left lane, “went straight out on to the road, ricocheted off the other car and broke the glass at the coffee shop - usually there’s people sitting there”, Mr Flanagan said.

“I’m driving since I was 18. I’m 68 now, I drove everywhere in the world and I never saw anything like it. It was like the bumpers in Lahinch,” he told Judge Eugene O’Kelly.

Darrach McCarthy, for Ms Bolatiwa, put it to Mr Flanagan that there was no mention of his client having cut across another motorist in his statement. Nor had Mr Carroll mentioned anything about speeding when he made a statement to gardai, the solicitor said.

Ms Bolatiwa denied the manner of her driving had been dangerous. She had attempted to cross O’Connell Street “in the normal way”.

She could not recall which lane she had exited Cecil Street from but, with two children to care for, it was not her habit to speed.

“I wasn’t driving fast at all. I know the speed limit. I stopped at the junction, looked and then went ahead. I went through normally,” she said.

“All I heard was a big hit and I was gone,” Ms Bolatiwa added. Such was the force of the impact that the driver’s airbag had deployed and the windscreen cracked.

Cross-examining, Inspector Brian Sugrue put it to Ms Bolatiwa that had her car been stationary or close to stationary when the impact occurred, it was unlikely it would have travelled all the way across the street.

Judge O’Kelly said that the evidence of the three witnesses for the state, none of whom appeared to know each other, was consistent and “if I am to believe Ms Bolatiwa, then there was a conspiracy between the others that amounts to perjury”.

He was satisfied that this was not the case and that the accused’s recollection of events was “defective”.

Judge O’Kelly said Ms Bolatiwa ought to have stopped at the junction before attempting to cross O’Connell Street.

Mr McCarthy said his client was the “person who was the most injured in the accident” and still believed that she had committed no offence on the day. He asked the judge to consider in imposing sentence that his client had a perfect driving record until now.

In what he said was “very obviously” a case of dangerous driving, Judge O’Kelly fined Ms Bolatiwa €150 and disqualified her from driving for two years.

“It was fortunate,” he added “that there were no customers having coffee outdoors at Cafe Creme at the time.”