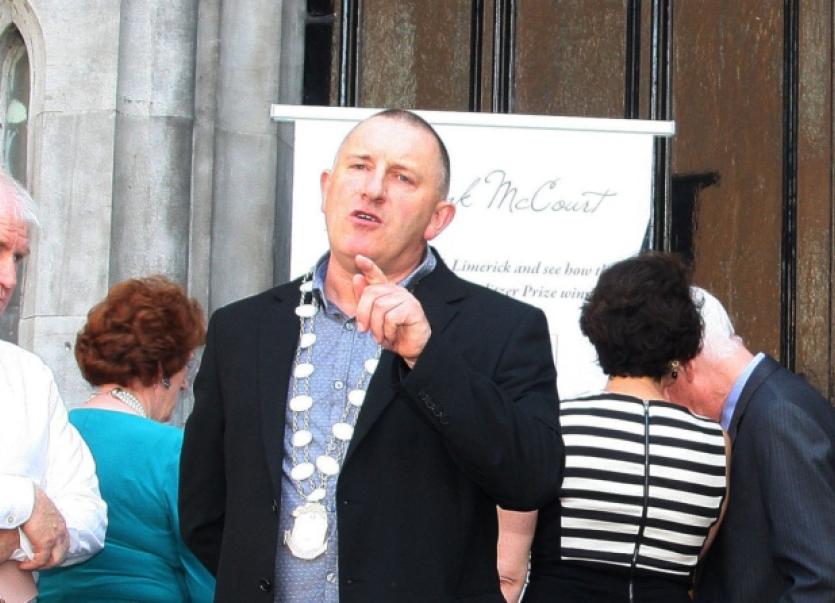 LABOUR councillor Tom Shortt has called on the owner of the Frank McCourt museum to adopt the ‘compassionate’ nature of the famous author when she gives a progress report later this month to court on graffiti artists ordered to clean up her building.

LABOUR councillor Tom Shortt has called on the owner of the Frank McCourt museum to adopt the ‘compassionate’ nature of the famous author when she gives a progress report later this month to court on graffiti artists ordered to clean up her building.

Two of the four young men brought before the court on these charges face up to five months in prison if the work is not carried out to the satisfaction of the court.

Cllr Shortt, an art teacher and an advocate for a dedicated graffiti zone in the city, intervened in the legal process twice at the weekend but said he stands by his remarks. He initially made his remarks addressing the crowd at the Frank McCourt museum on Friday night, before the musical of Angela’s Ashes was staged, and in front of the McCourt family.

“I hope that Una’s further intervention in this case will be in the spirit of Frank McCourt,” he reiterated, adding that her report “will have a huge bearing on whether they go to prison or not.”

Ms Heaton said his remarks were “totally inappropriate, in bad taste and very rude of him” on a night which was “a positive occasion for Limerick” and was the wrong platform for airing his personal views.

“I am not judge and jury. The city council took the case against these men, and it’s the judge’s decision, not mine. I don’t want them to go to prison, I just want them to right their wrong,” she said.

When asked by gardai on the progress of the clean up at the museum, Ms Heaton said two of the men had turned up regularly, one had turned up sporadically and another man had only turned up two or three times.

She said she stands over the reports she gave to gardai, and said she’s “a victim”, rather than the offenders “who feel that they’re getting a bad press.”

Cllr Shortt conceded that the ‘tagging’ of buildings in the city is “wrong” but urged that there needs to be some understanding about why people do these things, especially if they come from disadvantaged backgrounds.

Ms Heaton said the men before the courts “are from mixed backgrounds - well-to-do to ordinary people”, but their backgrounds is not the issue in this case.

In a statement to the Limerick Chronicle, Cllr Shortt said: “I made the comments in the context of where the input of the museum’s owner is now crucial to the outcome of the case and the decision as to whether two of these teenagers will go to jail.”

He said that Frank McCourt, in his third memoir Teacher Man, had “agonised over how a negative report from him might impact on the life of his students”.

“McCourt showed huge compassion for his students and took all extenuating circumstances regarding a students background into account when submitting reports on their performance.”

Ms Heaton earlier told the court that the walls at the listed building would cost up to €4,500 to remove professionally.

The court heard last week that the work of Jonathan Noonan, 19, Upper Cecil Street, and Ruairi Fogarty, aged 19, Drominbeg, Rhebogue, has been more “sporadic” than their fellow counterparts before the court, Nathan Murray, 19, of Mahon House, Upper William Street, and Ian Hopkins, 21, of Kildooms, Clonlara.

They all admitted offences of defacing property, but Mr Noonan and Mr Fogarty are due back before the court on July 31.

Judge Eugene O’Kelly said he wants to see a “positive and glowing report” on both parties on that date.

Solicitor Darach McCarthy said he was surprised to hear this report about his client, Mr Noonan, as he attended the museum “each and every single day, apart from the last two,” while Mr Fogarty had moved home to Thurles after losing his job as a result of the case.