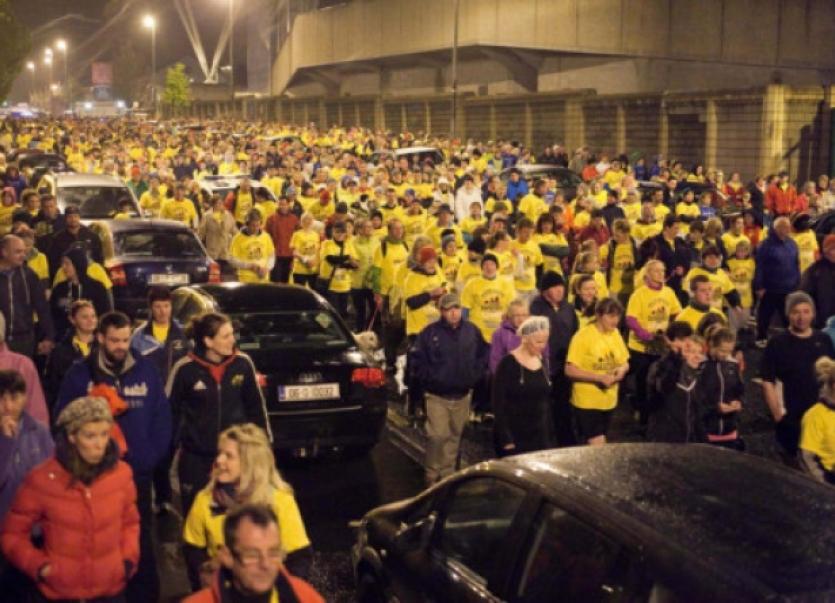 A SEA of red is the normal colour flowing into Thomond Park as thousands of loyal Munster fans head for the northside.

A SEA of red is the normal colour flowing into Thomond Park as thousands of loyal Munster fans head for the northside.

But on Saturday, yellow was the colour teaming out of the rugby stadium, as more than 6,000 people took part in suicide charity Pieta House’s annual Darkness into Light walk.

The five kilometre walk kicked off outside the home of Munster Rugby at 4am, taking in the North Circular Road, O’Connell Street and Nicholas Street before finishing at dawn.

The fourth year the walk has taken place in Limerick, the number of people donning yellow t-shirts for the event has grown three-fold in just one year.

People of all ages descended on the stadium in the middle of a wet and rainy night, with all proceeds going to Pieta House’s support centre in Mungret.

The trek is symbolic, as it represents the walk from the darkness of depression, to the dawn of light, and wellness.

Pieta House fundraiser Kieran O’Brien admitted he was on “cloud nine” - and targeted 12,000 people at next year’s event.

The attendance in Limerick was only a few hundred behind that in Dublin.

He thanked the Ferguson family for giving them their former unit in O’Connell Street to register people for the event, Thomond Park for providing the start point and Masterchef’s for proving food to participants.