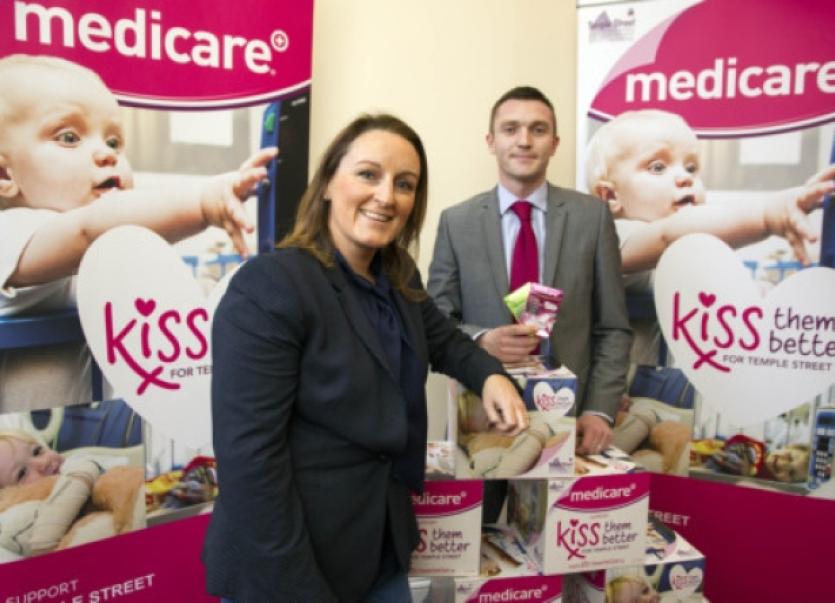 LIMERICK company Fleming Medical aims to raise thousands of euro for the care of sick children by making a donation every time a pharmacy cash register rings a sale of their plasters.

LIMERICK company Fleming Medical aims to raise thousands of euro for the care of sick children by making a donation every time a pharmacy cash register rings a sale of their plasters.

Based on the Dock Road, the firm provides the Medicare range of first aid products and has teamed up with Temple Street Children’s Hospital to buy lifesaving equipment such as monitors and ventilators for sick children.

The Kiss Them Better campaign has been launched at Temple Street by Today FM’s Jenny Kelly along with Fleming Medical’s Keith Sheridan, Teresa McHugh and Carroll Dore.

“We are delighted to be able to support one of Ireland’s most deserving causes with this campaign,” said Mr Sheridan, pharmacy key account manager. “Thankfully most children who attend the emergency department can go home with a bandage or a cast and most importantly, a magic kiss. ‘Kiss it Better’ is something every Irish parent says and does when their child has a bump or scrape and this is the inspiration for our appeal to help raise lifesaving funds for children with serious illnesses.”

The campaign will see a donation made to the hospital for every pack of Medicare plasters bought in a pharmacy and the proceeds will fund the purchase of emergency equipment for Temple Street.

A spokesperson for the hospital said that at around 50,000 children cared for annually, the hospital had one of the busiest emergency departments of its kind in Europe.

In 2012, most admissions for children aged five and under were for head injuries (1,862), often caused by falls from parents’ arms or off tables onto hard surfaces. This was followed by cuts or lacerations (1,316), fractures (770), sprains and muscle injuries (605).

Over 3,000 older kids aged between 6 and 16 were admitted with sprains and muscle injuries, most having occurred at play or in sports. Other common injuries for these children were fractures (2,563), cuts or lacerations (913) and head injuries (752).