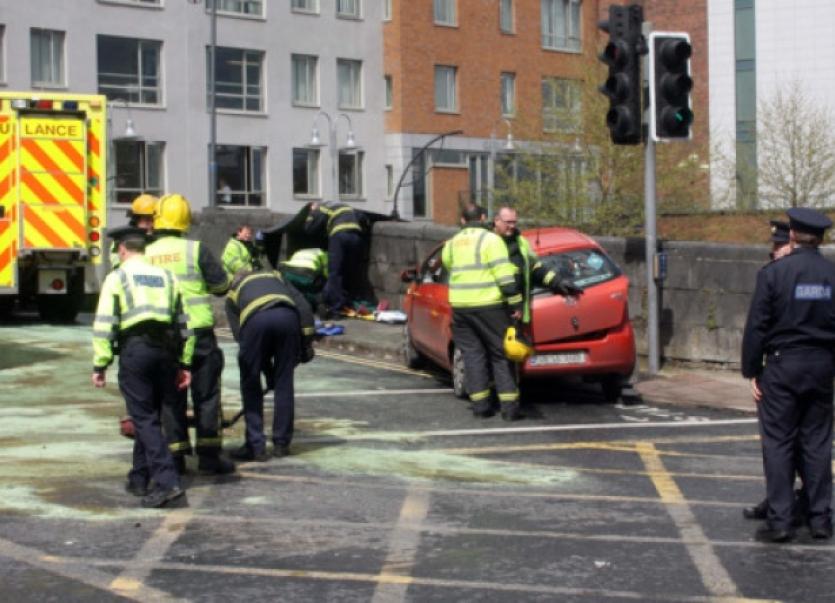 INVESTIGATIONS are underway follwing a road accident which resulted in four people being hospitalised.

INVESTIGATIONS are underway follwing a road accident which resulted in four people being hospitalised.

A silver 03D-registered Opel Vectra and a maroon 06CE-registered Toyota Yaris were involved in a collision at the junction of Lock Quay and Broad Street shorty before 2.30 this afternoon.

According to eyewitnesses the Yaris was travelling outbound on Charlotte Quay while the Vectra had just emerged from Broad Street when the collision happened.

The front of both vehicles were badly damaged in the impact, which saw the Yaris being shunted onto the footpath at Baal’s Bridge.

“It’s an awful junction and it is the second serious accident there in the last few weeks,” said one man who lives nearby.

The Vectra failed to stop at the scene but came to a stop a short distance away at Mary Street.

It is understood one of the occupants attempted to flee the scene on foot but was apprehended a short distance away.

Three ambulances, three units of the Limerick City Fire and Rescue Service as well as gardai from Henry Street station attended the scene of yesterday’s accident for a number of hours.

Two men and two woman were treated at the scene before being taken to hospital suffering from neck and back injuries.

Their conditions are not life threatening.

Gardai at Henry Street station are investigating the circumstances of the collision.