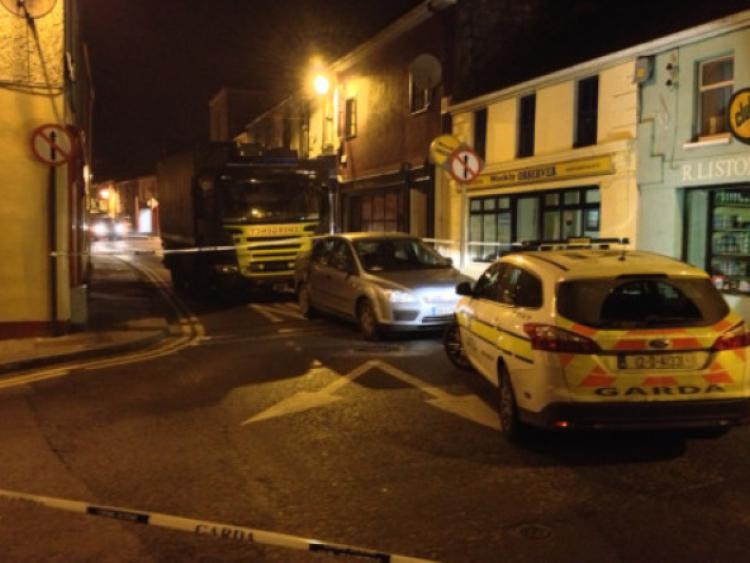 A FILE is to be sent to the Director of Public Prosecutions (DPP) after two suspected pipe bombs were discovered in a flat in Newcastle West.

A FILE is to be sent to the Director of Public Prosecutions (DPP) after two suspected pipe bombs were discovered in a flat in Newcastle West.

There were dramatic scenes on Maiden Street in the town late last Wednesday as residents were evacuated from their homes following a planned garda search of the apartment, which is directly above the constituency office of local Fine Gael TD, Patrick O’Donovan.

A 45-year-old Greek national was arrested in connection with the discovery, and was held at Newcastle West garda station under Section 30 of the Offences Against the State Act. However he was later released without charge.

Garda sources have confirmed that the discovery of the devices above Mr O’Donovan’s office was a coincidence, and that there was no threat against the TD or his office.

All residents on the street were evacuated from their homes, as were patrons in Cartlidge’s public house, just a few doors down from where the devices were discovered.

Mr O’Donovan, who was in Dublin at the time, described the incident was “shocking”.

“I only heard about it as it was unfolding. It’s shocking, absolutely. It’s not the type of thing you expect to happen. It was very well handled by the gardai, in fairness to them it was business as usual a few hours later”.

Martin Byrnes, the well-known former Limerick Leader journalist and a Maiden Street resident, was in Cartlidge’s when the alarm was raised.

“I was parked on the road when a garda came into the pub and asked if he could move my car. I gave him the keys, and that was that. I tried to ask the other garda what the situation was, and they wouldn’t tell me. A little while later they told me that me and my sister had to leave.”

Mr Byrnes, along with a number of local residents, had to stay in hotel accommodation that night. The section of the street which was sealed off is mostly home to shops, which were closed at the time. One fast-food restaurant was already in the process of closing when the alarm was raised.

A Defence Forces bomb disposal unit was called and arrived at the scene at approximately 12.30am. Following an inspection, the suspected pipe bombs were declared non-viable, and the materials were removed from the scene.

A technical examination of the area was carried out by gardai, and Maiden Street was re-opened a number of hours later.

A spokesperson for Newcastle West gardai confirmed that a 45-year-old Greek national who was arrested in connection with the planned search was questioned for a number of hours, and was later released without charge.

A file on the matter is currently being prepared for the DPP.

Local county councillor Michael Collins said that the event was “frightening” for the people of Newcastle West, particularly the Maiden Street residents who were forced to leave their homes.

“It’s fairly frightening alright, especially for the residents who were disturbed fairly late at night.

“It’s not the kind of thing any of us are used to seeing in Newcastle West.”