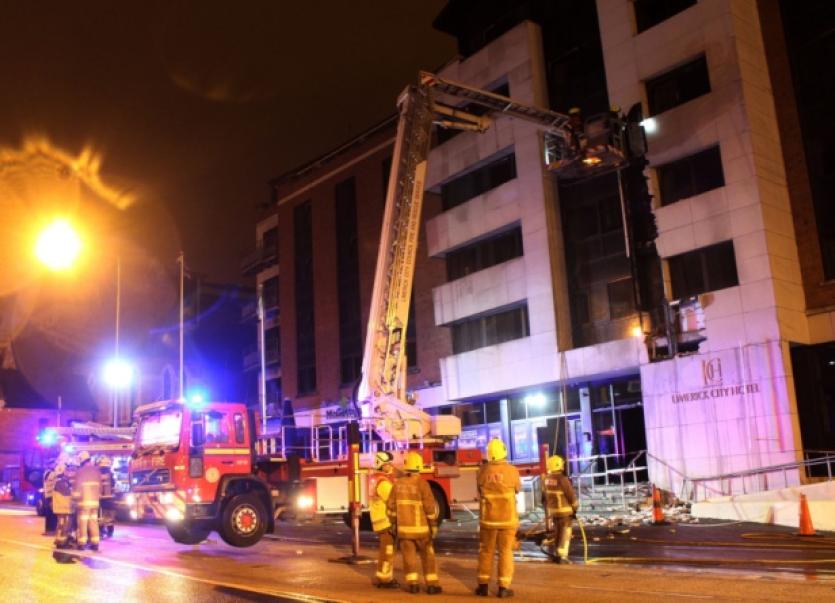 UP to 100 guests, including babies and young children, had to be evacuated from the Limerick City Hotel last night after a fire broke out.

UP to 100 guests, including babies and young children, had to be evacuated from the Limerick City Hotel last night after a fire broke out.

The alarm was sounded after 8pm, and four units of the fire brigade were deployed to the scene of the former Jury’s hotel on Lower Mallow Street.

While the fire was quickly brought under control, members of Limerick Fire Service, assisted by their colleagues in Shannon, spent over an hour demolishing part of the front of the building to get to the root of the cause.

They remained at the scene until just after 3am as did gardai.

The damage will cost thousands of euro to repair.

While staff were very apprehensive to comment on the cause of the fire, one staff member said it was caused by an electrical fault up on the sixth floor.

Dozens of people thronged the streets behind a cordon as the events unfolded. Hotel guests were also given refreshments during their ordeal at the nearby Brimstone bar and restaurant.

One couple from northern Ireland who evacuated their room on the sixth floor with their baby said: “We expected that our first night in Limerick might be eventful, but we didn’t expect it would be this kind of eventful.”

Patrons of McGettigan’s bar who were enjoying a birthday party were also evacuated for safety reasons.

Guests who had booked into the Limerick City Hotel were put up at other hotels across the city last night.

The street and the hotel were sealed off this Saturday morning.