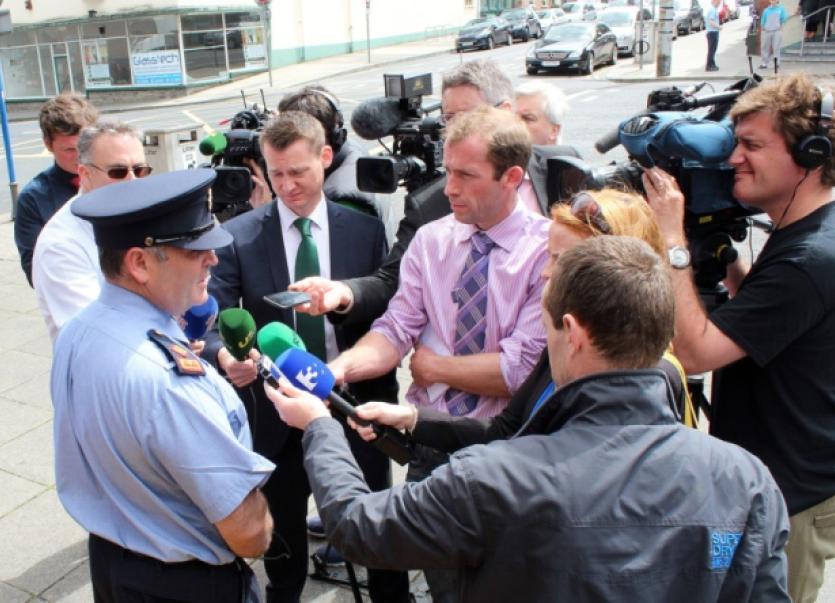 GARDAI investigating the attempted murder of gangland figure Christy Keane have arrested a man in connection with the shooting.

GARDAI investigating the attempted murder of gangland figure Christy Keane have arrested a man in connection with the shooting.

The arrest of the man in his 30s was made on Monday night in the Limerick area and he is currently being detained under the provisions of Section 50 of the Criminal Justice Act 2007 at Henry Street Garda Station.

Gardai have also recovered two handguns, believed to have been used in the attack.

They were discovered in a Red Ford Focus hatchback which was found burnt-out in Monaleen shortly after the shooting at the University of Limerick early on Monday morning.

The handguns, which it is understood were in a poor condition, have been sent for ballistic analysis at garda headquarters.

Meanwhile, gardai are appealing for information about the two high-powered cars which were found burnt-out at two separate locations.

A red 132-D-registered Ford Focus hatchback was located near Monaleen Stores, while a white Volvo V70 with English registration plates was found near Drombanna shortly after 7am.

Both cars have been seized by gardai and will be forensically examined as part of the investigation, which is being led by Superintendent Derek Smart.

“My appeal is for anybody who may have seen this red Focus or the white Volvo V70 in and around the city in recent days to contact us here at Henry Street garda station at (061) 212400,” he said, adding that gardai have yet to establish of the vehicles were connected to the shooting.

“I would also like to appeal to anybody using the University of Limerick Arena, a lot of people use the gym and the pools area, and I would to appeal to them if they saw anything over the last number of days in and around UL that they would make contact with us,” he added.

Members of the Garda Technical Bureau arrived in Limerick on Monday afternoon to carry out technical and forensic examinations.

It is understood Keane, a 54-year-old married father-of-two, was approached by two gunmen at around 6.45am shortly after he parked his Nissan Navaro in a car park near the UL Sports Arena.

He sustained wounds to his body and arms and managed to make his way from the car park to the running track before his attackers fled.

While serious, his condition is not believed to be life-threatening.

“The injured party in this case would be known to us, he was going about his lawful business. He is a married man with two children he was entitled to be where he was so the circumstances as to how he became injured is still very much open in this investigation,” said Supt Smart.

Speaking at a press conference outside Henry Street garda station on Monday lunchtime, he said gardai have yet to speak with the victim of the shooting.

He said gardai were not aware of any imminent threat to his life and that there was no specific security operation in place - despite his criminal history.

Supt Smart confirmed the incident was being treated as a case of attempted murder and when pressed he said he was happy with the level of resources available to him.

“Resources will always be an issue but I’m satisfied that we have sufficient numbers of people working in the different locations around the city and if we need national support they will be brought in to us as well. I’ve no difficulty with resources at this time,” he said.

An incident room has been established at Henry Street garda station and anyone with information is asked to contact (061) 212400.

The shooting has been condemned by the Mayor of Limerick City and County - Cllr Liam Galvin.