Holy row as cross is erected in Limerick council chamber 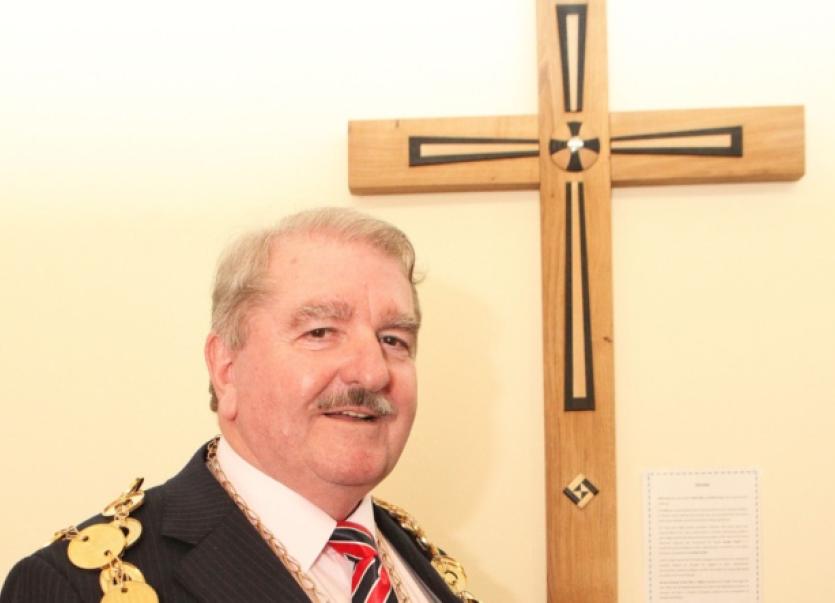 A HOLY row has erupted on Limerick City and County Council after the former mayor, Cllr Kevin Sheahan, had a cross erected at the chamber on his final full day in office.

A HOLY row has erupted on Limerick City and County Council after the former mayor, Cllr Kevin Sheahan, had a cross erected at the chamber on his final full day in office.

The day before he handed over his chain of office to Cllr Liam Galvin, Mayor Sheahan had a bog-oak cross put in place beside the door of the debating chamber.

Councillors were taken aback to arrive at last Friday’s AGM and see the religious symbol, as they have believed that a vote would take place on whether or not it would be allowed. The issue was first raised last year when Cllr Sheahan offered to get the cross commissioned out of his own pocket.

Following complaints by some councillors about the appropriateness of the idea, it was put on the back burner.

But this week, the issue of whether a Christian symbol belongs in the local authority is back on the table.

While Cllr Sheahan declined to comment, a number of other members have had their say. Fine Gael councillor Daniel Butler said “it is not the most inclusive decision to make,” but Independent councillor Emmett O’Brien said: “It is a masterpiece of local craftsmanship.

“It is very rarely that I would agree with Cllr Sheahan, but on this occasion, I commend him on having the foresight to erect this cross,” said the barrister. “There are numerous secular countries throughout Europe which still have crucifixes and crosses in public places. A cross is not an affront to any other religion. It is a sign of peace, tranquillity and a sign of harmony between religions of all right mind.”

It is understood Cllr Sheahan engaged the services of a wood turner from East Limerick.

Although he paid for the cross out of his own pocket, he engaged council staff in the process.

Cllr Butler pointed out County Hall in Dooradoyle is in the vicinity of the Limerick centres of the Church of Jesus Christ of Latter Day Saints (the Mormon church) and the Islamic Cultural Centre.

He said: “I share the fame faith, so it doesn’t offend me personally. But we always should try to be inclusive in everything we do – look at the recent equality referendum. By showing preference to one faith over another, it goes against that principle. Faith is particularly divisive, so when you start choosing particular faiths over others, you are going to create problems.”

The mayor of the metropolitan district Cllr Jerry O’Dea shared these concerns, saying: “We are moving towards an age where Limerick is a multi-denominational city. The erection of a cross aimed at one particular faith may not be the direction we want to be going in.”

However, the Mayor of Limerick City and County, Cllr Liam Galvin said: “I have no issue with it. It was a decision made by the mayor of the day, and I have not got a problem.”

However, the Fine Gael man added: “I’m sure this will rise a debate with some of the opposition. There are some smaller parties in our council, and whatever the major party does, they seem to raise opposition to it.”

But Sinn Fein councillor Ciara McMahon – who studied religion – said she has “no major objection” to the cross either on a personal or professional level.

“It is a beautiful piece of artwork by a local artist. It has no religious iconography on it, it is a simple plain cross.”

She believes the people of Limerick are far more worried about “every day living stresses” like water charges, lone-parent cuts, and wage reductions.

Her party colleague, Cllr Lisa-Marie Sheehy believes a vote should have been taken, however.

“We cannot set a precedent here,” said the 21-year-old councillor, “If it was down for a vote, it should have been voted on. We are a very diverse council.”

“But it would be better off being put up in Cllr Sheahan’s personal office, or his party’s office if they want. The council itself should be a neutral, secular space.”

But having seen the emblem, he said: “I am very much taken by the excellent work of the designer. I think it is a very artistic and tasteful addition to the space that it occupies.”