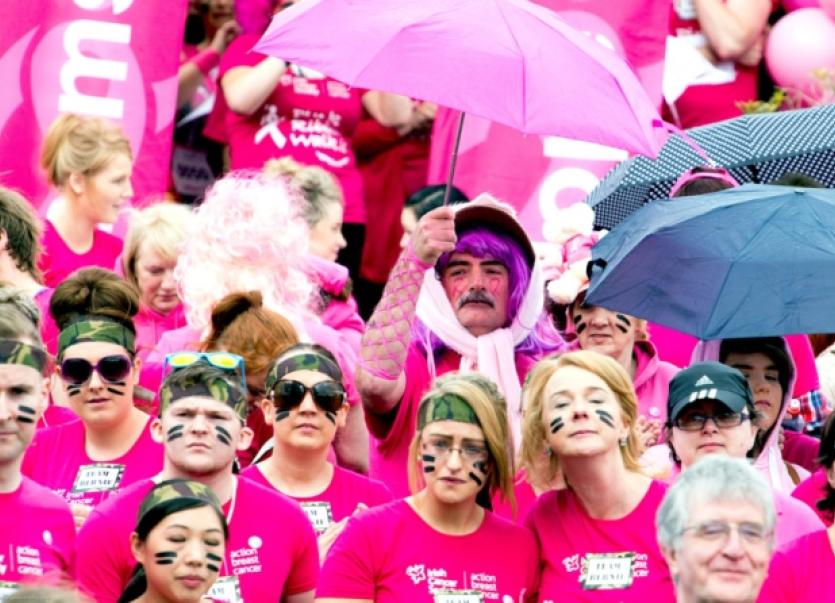 OVER 1,000 people took part in the annual Pink Ribbon Walk in the twin villages of Killaloe and Ballina at the weekend, making it the biggest event in its six-year history.

OVER 1,000 people took part in the annual Pink Ribbon Walk in the twin villages of Killaloe and Ballina at the weekend, making it the biggest event in its six-year history.

A sea of pink descended on the picturesque villages in Aid of Action Breast Cancer.

Niamh Briggs, captain of the Irish women’s rugby team, who was this year’s Killaloe Pink Ribbon Ambassador, led the army of pink attired ladies – and a few men – on the 10k walk from the Lakeside Hotel in Ballina.

“It is an honour to be asked to support such an amazing charity its so important to spread the good word, fight the fight and some day they will find a cure,” she said.

The first person to cross the finish line was Martin Pearl of Ballina, in a time of 45min 02sec and right behind him was the first lady to pass the line, Mairead O’Callaghan of Effin, in a time of 46.17

Carmell DeMello, the new chairperson of the event, who took over the reins from Nicola Wood, said she was “absolutely thrilled” with the turnout.

“It is such an amazing cause, and I’m very proud of the residents of the town for all their effort in making today what it is,” she said.

Among those taking part was mother of two Melanie Hunt from Corbally, who completed her first Pink Ribbon Walk four years ago, just weeks after undergoing a mastectomy.

The breast cancer survivor now volunteers at the Daffodil Centre in University Hospital Limerick, which has been largely funded by the money raised for the Pink Ribbon walks.

Melanie also runs a Facebook Page – entitled Knackered Knockers – where on the first day of every month, she reminds friends to always check for lumps because an early diagnosis is vital.

Once again the locals outdid themselves dressing shop windows, flying flags, and balloons, while pink bras hung across the bridge joining the two counties in one common fight.

The funds from the walk will go directly to Action Breast Cancer, a programme of the Irish Cancer Society that supports a number of crucial services.

Those services include the National Cancer Freefone Helpline (1800 200 700) staffed by specialist cancer care nurses, who are available to speak to anyone concerned about cancer or who require more information.

In one year also specialist cancer nurses supported 22,120 callers to the National Cancer Helpline, and over 700 of these calls came from the Mid-West region.