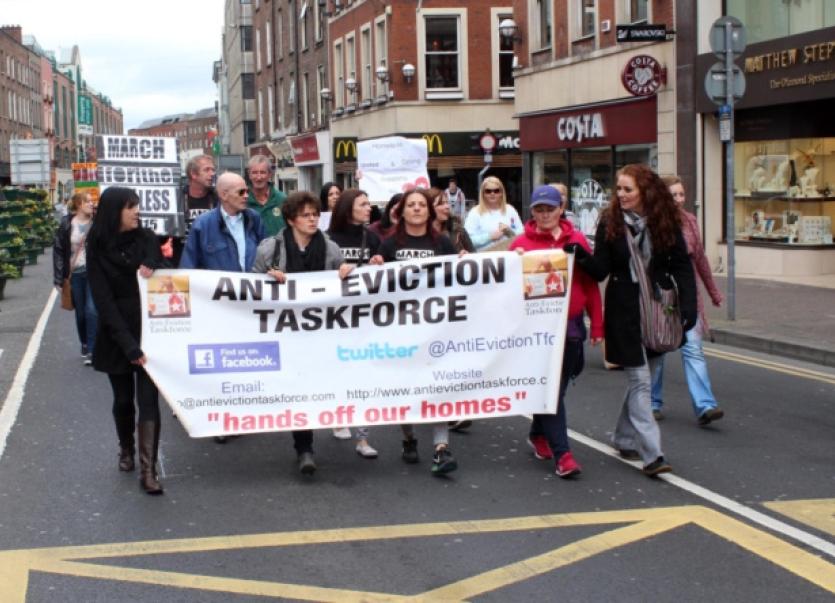 THE many problems which lead to homelessness were highlighted by a march and ‘sleepout’ in the city centre.

THE many problems which lead to homelessness were highlighted by a march and ‘sleepout’ in the city centre.

The first annual March for Homelessness drew up to 50 people to the streets of Limerick - and ten of these took part in a ‘sleepout’ on the same night in a bid to mimic the conditions of forced vagrancy.

The inaugural march was one of many taking place throughout the world last Wednesday.

Community activist David Houlihan from Parteen, who organised Limerick’s event, which left Arthur’s Quay, said: “There were lots of different reasons people were marching. People had relatives who were evicted, people knew homeless people. One lady had her son’s family sleeping in her sitting room.”

They were joined on the patrol by the United and Strong citizens rights group.

Set up last year, the group exists to provide information, support and empowerment to people in family crisis, as a direct result of domestic abuse.

“They were saying a lot of abused women also have to leave their home due to domestic abuse. They end up homeless, as they won’t go back, and they certainly won’t let their kids go back,” David reported.

Following the march, a group of ten hardy souls set up camp outside AIB in O’Connell Street where they remained for the night to draw attention to the city’s homelessness problem.

“It was bitter cold. It was a mild enough night, but when you are not moving and lying on a pavement, it makes a difference,” David said.

Many revellers asked if they could donate money, but were instead asked to give to the Simon community, which provides support to homeless people.

David said the experience really opened his eyes to the conditions homeless folk have to put up with.

“I felt wrecked by the end of the night. I don’t know how homeless people face it. It is actually cruel. It would be cruel to leave a dog out on the street. I just wonder how do women and children survive,” he asked.

The issue of homelessness in Limerick is constantly on the agenda.

Cllr Sean Lynch of Fianna Fail has called on a number of occasions for a temporary homeless shelter in the city for the often bitterly cold months of October to March.

While he accepted rough sleeping was not as serious a problem in Limerick as in other cities, he insisted there was still a cohort of people not in hostels.