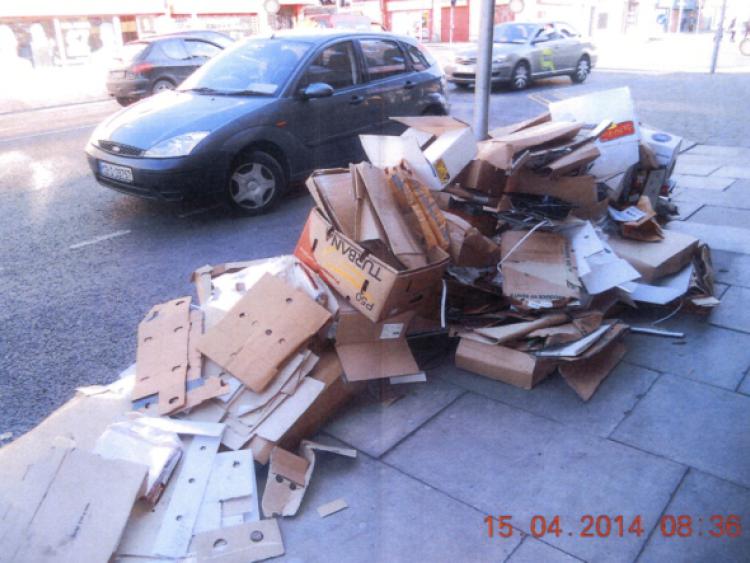 THE owner of a Limerick city centre foodmarket was fined €250 after he was prosecuted and convicted of a littering  offence.

THE owner of a Limerick city centre foodmarket was fined €250 after he was prosecuted and convicted of a littering  offence.

Rahmatullah Shirullah was successfully prosecuted by Limerick City and County Council following the detection of a large amount of commercial rubbish on the footpath outside a premises on Parnell Street last year.

In his evidence, environmental inspector Michael Walsh told Limerick District Court that while on patrol on the morning of April 15, 2014, he observed a large amount of rubbish dumped outside the Asian and Arabic Foodstore, which is owned by the defendant.

He said having examined the rubbish, which consisted of “lots of cardboard and plastic packaging”, he was satisfied that it was related to the business premises.

A photograph of the pile of rubbish, taken by Mr Walsh, was produced as evidence during the court proceedings.

“It was a significant incident (of littering) over a comparatively short period of time,” he said.

Mr Walsh agreed with solicitor Ger Reidy, representing the local authority, that the rubbish was found on one of the city’s main thoroughfares and was located “not terribly far” from Colbert Station.

An on-the-spot €150 fine was issued to Mr Shirullah who admitted he did not have a bin service in place for his business at the time.

Judge Marian O’Leary was told the defendant failed to pay the €150 fine and that a number of weeks later he lodged an appeal with the local authority having initially claimed that he had lost the fine.

Mr Walsh said following the appeal process and given certain undertakings from the defendant, the fine was reduced to €75 by the local authority.

However, as the (reduced) fine remained unpaid, a decision was subsequently taken to prosecute the defendant in the district court.

During the proceedings, Mr Walsh confirmed that despite his failure to pay the fine Mr Shirullah engaged with the council and put a rubbish collection service in place a number of weeks after the detection.

Judge O’Leary fined the defendant, who was not present in court, €250.

In addition, she ordered that he pay the legal and administrative costs of Limerick City and County Council, which totalled €440.