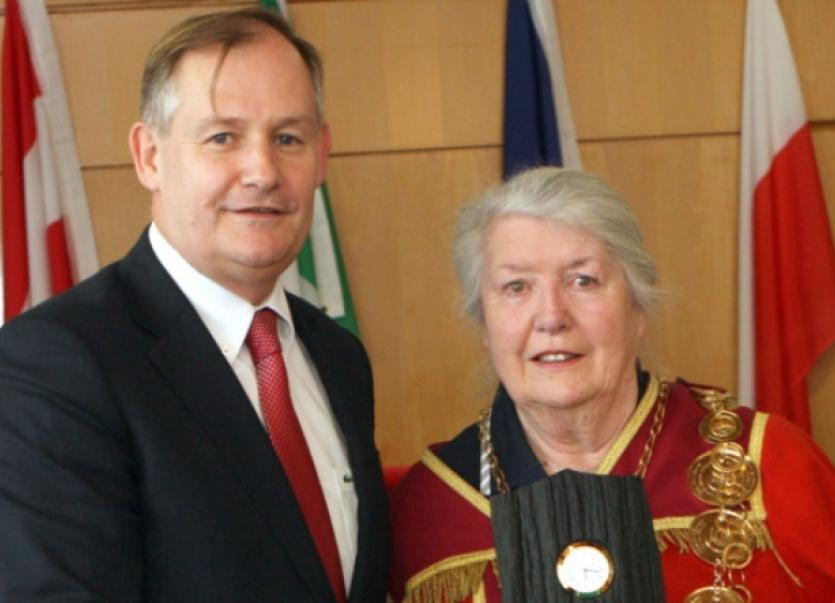 “A HISTORIC day tinged with some sadness”, said Mayor Kathleen Leddin as Limerick City Council met for the last time this Monday.

“A HISTORIC day tinged with some sadness”, said Mayor Kathleen Leddin as Limerick City Council met for the last time this Monday.

With the age-old municipality about to be joined to Limerick County Council, members looked back with fondness of how the city had developed since being granted a royal charter in 1197.

Cllr Diarmuid Scully pointed out that long before King John had afforded Limerick city status, the Vikings would pow-wow at St Mary’s Cathedral, meaning “democracy and local government in Limerick in fact goes back more than 1,000 years”.

With such a history behind it, it was little wonder that councillors appealed to the ancients for inspiration.

Surveying the last 1,000 years or so, Limerick’s longest-serving politician, Cllr Pat Kennedy, chose to focus on the last 47 –and specifically his record of achievement during those years.

In a 10-minute speech that some rivals took for a valediction and others the opening salvo of a re-election bid, Cllr Kennedy expatiated on virtue in public life and quoted Cicero (‘Civis Romanus Sum’).

Even city manager Conn Murray appeared to have caught the bug when in appealing to councillors to adapt to the new regime, he reminded them of the words of Socrates.

“The secret of change is to focus all of your energy not on fighting the old but on building the new,” he advised councillors.

One city councillor not going down without a fight was Cllr John Gilligan, although he evidently prefers the Romans to the Greeks.

“Unlike Caesar, we have come both to bury and to praise Limerick City Council,” he declared.

Councillors noted that Seoirse Clancy and Michael O’Callaghan, the murdered mayors of 1921, had died defending Limerick and Irish freedom. But they had not been the first.

Dominic Fanning had been hung, drawn and quartered by the Cromwellians after their 17th century siege. And while the years following this debacle, 1651 and 1656, represented the only break in the history of the council, Cromwell had failed to kill Limerick or Limerick City Council.

This, Cllr Gilligan said, was more than could be said for Phil Hogan or Denis Brosnan.

“This council did not die. It was murdered by the craven cowardice of a government unwilling to confront our colleagues on the County Council,” said Cllr Gilligan of Minister Hogan’s decision to opt for a merger rather than extend the city boundary.

“Cromwell tried to kill the city and failed but maybe Phil Hogan will succeed.”

Former Kerry Group chairman Denis Brosnan, whose report on dysfunctional local governance in Limerick resulted in the recommendation to amalgamate the councils, was dismissed by Cllr Gilligan as “a purveyor of dairy products”.

Part of the basis for Mr Brosnan’s recommendation was that a merger would save €20 million but the latest information Cllr Gilligan had suggested the amalgamation would cost money.

Cllr Kieran O’Hanlon and Cllr Maurice Quinlivan were among those councillors who told the final meeting that the merger was a mistake and that the government had lacked the courage to bring Shannon Banks and Westbury into the city boundary.

“Instead we have brought in areas that were not consulted, that are not naturally part of the city and have no affinity with the city,” said Cllr Quinlivan in relation to the boundary redraw that includes farmland around Patrickswell and Castleconnell as part of the Limerick Metropolitan District.

But Cllr Joe Leddin said that while “Limerick has a proud history, it has a really exciting future”.

And Cllr Scully also noted that in spite of the sweeping changes, Limerick retained its city status and its mayor.

“It is important that the office continues in this time of extraordinary change and sharing the local government of the city with our friends outside the boundary overall a good thing,” he said.

Cllr Gilligan, meanwhile, had appealed to whoever is returned in June not to let the city nor the office of mayor – which will be subordinate to the overall council leader - “die off”.

But Mr Murray said the merger did not threaten the office of mayor, which in the shape of Kathleen Leddin has its 817th incumbent.

Limerick City Council would admittedly no longer be a separate local authority but the 21 members of new metropolitan district retained the right to elect a mayor.

“In this manner, the identity and traditions of the ancient city of Limerick will continue into the future,” Mr Murray said.

All members of the council were presented with commemorative scrolls by Mayor Leddin.

This was followed by the opening of an exhibition at City Hall - 1197-2014: Limerick City Council, A Retrospective.