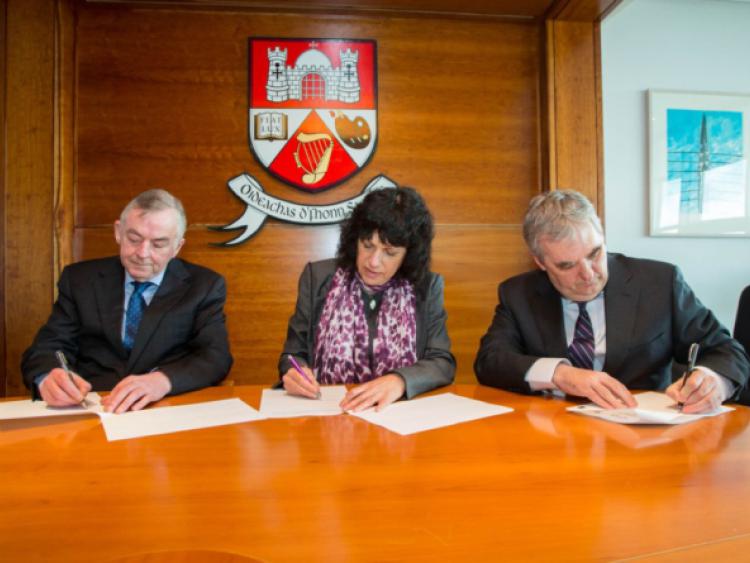 PLANS for a massive student village in the city centre have taken a step closer this week with the signing of a new strategic alliance between LIT, UL and MIC.

PLANS for a massive student village in the city centre have taken a step closer this week with the signing of a new strategic alliance between LIT, UL and MIC.

The heads of the three institutions signed a memorandum of understanding this Wednesday that will lead to “enhanced collaboration, co-operation and development” between Limerick’s three major third level colleges.

One of the first tangible results will be the formation of a Limerick Graduate School - a federation of sorts between the three institutions for postgraduate research students - that will take effect immediately.

The agreement is a deeper, more formalised alliance than that of the Shannon Consortium - in effect since 2006 - and in line with the Higher Education Authority’s wishes for the regional clustering of third level institutions.

“It will strengthen and increase the capacity for what we can do, and it is also a better utilisation of resources,” explained LIT president Dr Maria Hinfelaar in an interview with the Limerick Leader.

“It will deepen the existing alliance and the stakes will be higher because there is funding tied in with it from the HEA.

“This is going to be an alliance which will have a more real and beneficial impact on the ground - that is the intention,” she stressed.

Tim O’Connor, former Gathering boss and current vice chair of City of Culture, will take on that role.

The new cluster will underpin the provision of higher education in the region and create new opportunities for current and future learners which will benefit industry and the wider community, the three presidents said.

“This collaboration will transform the Higher Education landscape in the region by building on our existing strengths and developing intensive regional collaboration,” said Prof Barry.

“We are committed to working together to ensure that the region’s third-level educational resources are used to best effect in meeting the needs of learners.”

“While recognising the autonomy of each institution the consortium recognises that the sum is greater than the parts. The formal signing of this memorandum is a significant step in achieving a national priority around regional clusters,” he added.

Dr Hinfelaar said the three institutions would now be “looking at our city centre presence”.

“We want to play our part in that and we were looking at student accommodation in the city centre, where we might join forces,” she said.

The HEA has approved the cluster, which has been in planning for over 12 months.

“They have approved it - and are encouraging it. It is part of the funding model that you need to deliver on these things,” added Dr Hinfelaar.