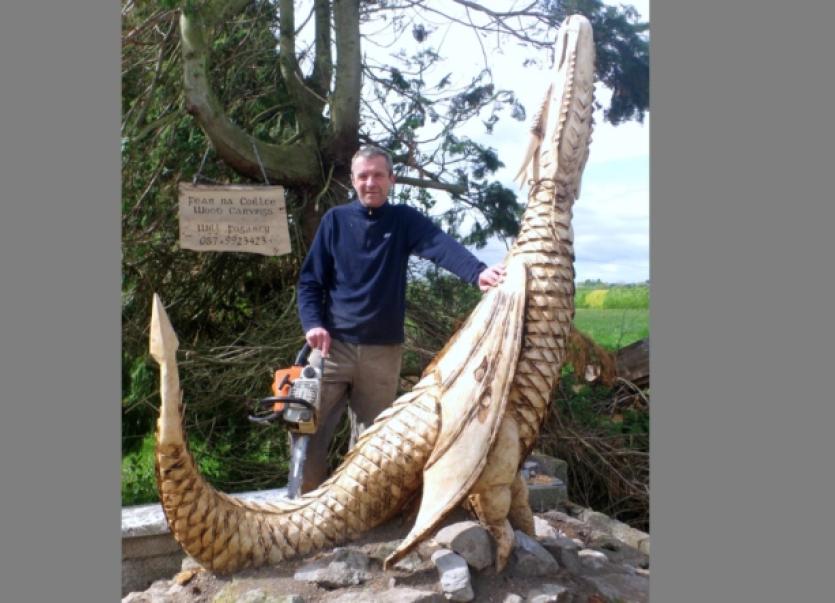 MOTORISTS in the village of Hospital could be forgiven for thinking they have driven onto the set of Game of Thrones, after an 8ft dragon has taken up residence outside a house on the Emly road.

MOTORISTS in the village of Hospital could be forgiven for thinking they have driven onto the set of Game of Thrones, after an 8ft dragon has taken up residence outside a house on the Emly road.

The imposing figure was sculpted out of a tree which fell victim to the force of Storm Darwin in mid-February.

The work of art was completed by local man Will Fogarty who turned his hand to wood carving after the downturn in the construction industry.

“There is a constant stream of people slowing down and stopping, calling in and getting a photograph,” said Will whose background is in construction and engineering.

“The beauty about the dragon is that you can make it up as you go along - it is not like you are carving a cat or a dog or a horse.”

Will, who always enjoyed working with wood, first began wood carving “but over the last year and a half I progressed on to chainsaw carving which would be very popular in the States, the UK and on the Continent but there is not many people in Ireland doing it”. “I went on YouTube looking at videos and basically taught myself.”

The idea of carving a dragon, he says, came about purely because of the storm. “The tree got knocked over. I chopped a few bits off it for firewood and was left with this interesting stump. It couldn’t have been in a better position for me at the front of the house.”

The entire sculpture, Will says, took 25 hours to complete. “Most of it would be done with a chainsaw but I use little sanding tools to bring up a finish. There are darker sections done with a blowtorch to highlight the lines on the scales to make them stand out better.”

“As long as he has got scales or horns you have pretty much free reign really.

“I wanted to obviously include wings. The idea was that he would end up standing on that mound sunning himself really”. The only pieces he added were glass eyes made from a Heineken bottle.

In terms of publicity for his work - he operates under the name Fear na Coillte for Le Cheile Unique Irish Handmade Gifts - he couldn’t ask for a better shop window for his creations. “You can’t beat people passing by and seeing what you do,” said Will who resides at Oldtown, Hospital.

“Over the last month, I have had more enquiries from people and more business than ever before. I am on a busy road and people are seeing what I do.”