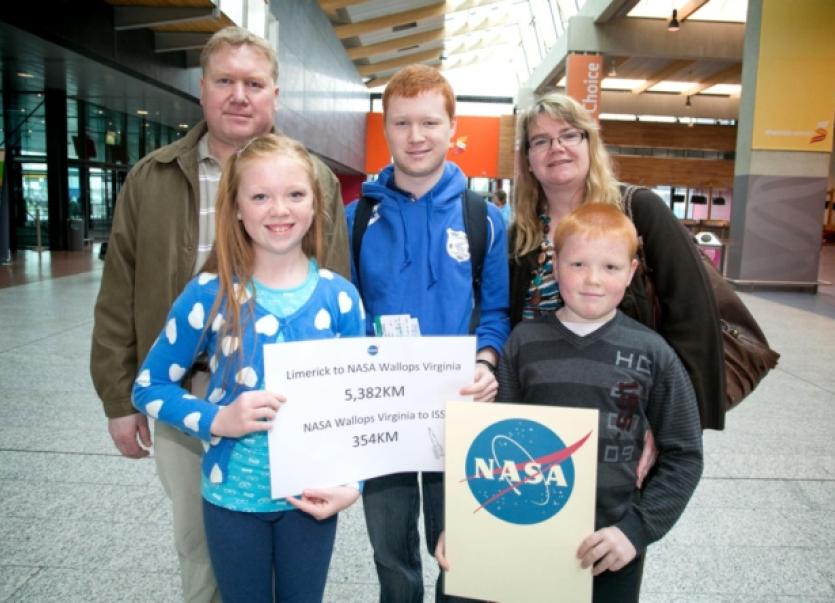 FOUR Limerick secondary school students are boldly going where no Irish students have gone before as their experiment to test the impact outer-space has on concrete.

FOUR Limerick secondary school students are boldly going where no Irish students have gone before as their experiment to test the impact outer-space has on concrete.

The experiment was the winning entry in a national competition, organised by the Irish Centre for Composites Research, and will be conducted on board the International Space Station after it lifts off from NASA’s Wallops Island base in Virginia shortly.

It was developed by the four budding scientists, who jetted out for Virginia at the weekend, from St Nessan’s Community College with a view to testing how Basalt-reinforced concrete reacts in micro-gravity.

The experiment, which will be activated by a NASA astronaut on board the ISS, builds on previous research carried out by Portland Cement in 1991. It will then be returned to the students, who will carry out tests, to determine how man-made products are sustainable in space and, in this instance, to determine if reinforced concrete can be used as a building material.

Their micro-sized, reinforced concrete experiment was flown from Shannon to the NASA centre eight weeks ago to undergo pre-flight trials and will spend 30 days orbiting the earth in the International Space Station.

It will then be returned to the students, who will compare the impact microgravity had on the concrete with the results of a ground controlled experiment they will be conducting back at their north-side Limerick college.

Their project was chosen for the Orbital Sciences Orb-2 mission by winning ‘The Only Way is Up’ competition run by IComp at the University of Limerick, through its partnership with NanoRacks LLC, the first operational space company providing goods and services in low-earth orbit.