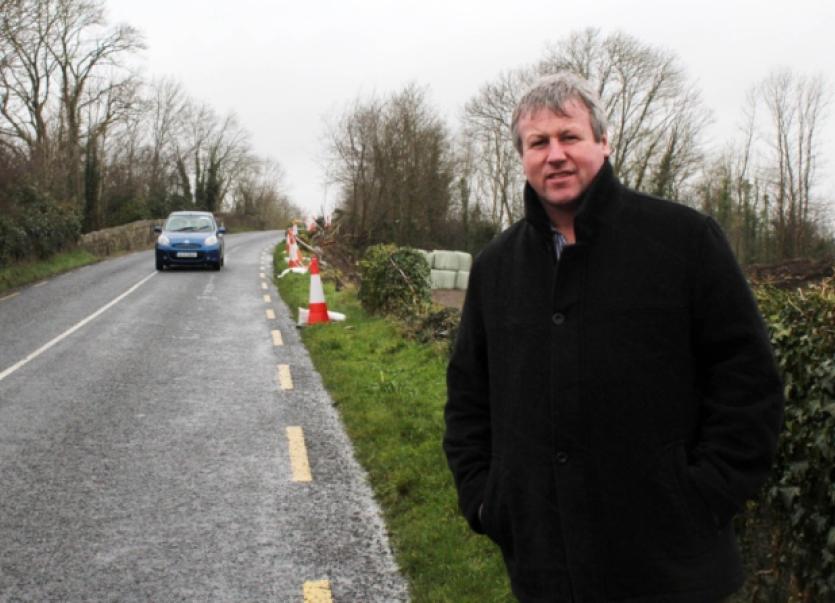 THE next accident to take place at a “perilous” bridge on the Limerick/Cork border will result in death or serious injury, local councillors have warned.

THE next accident to take place at a “perilous” bridge on the Limerick/Cork border will result in death or serious injury, local councillors have warned.

A large section of Garrienderk Bridge on the Kilmallock to Charleville road has been knocked down as a result of a number of accidents over the years.

“As you go back to Charleville, on the right hand side, one side of the bridge has totally disappeared all the way down. It is very, very dangerous – you could go straight in over it,” Cllr Mike Houlihan said at a Kilmallock area meeting.

Cllr Mike Donegan warned that because of the huge drop at the side of the bridge – the meeting heard it measures some 20 feet – “if someone goes in there, they are dead – that’s it, or seriously injured.”

“As least there should be some reflectors put up there or a safety barrier – some guidelines for someone who is not familiar with the bridge. It is wide open now and the fear is that someone will go in over it some night or some day,” said Cllr Donegan.

The meeting heard there has been a number of accidents there in the past, “each one taking their toll on the bridge, the result now being that there is no wall left”.

Executive engineer, John Madden, said it will cost “serious money” to rebuild the section of the bridge.

“It is going to cost serious money because if you come over the bridge from Charleville, all the embankment and wall on the left hand side is gone completely. There is a steep fall back into the field as well. You would need a foundation for the wall. It would cost a huge amount of money. We can make an application,” said Mr Madden.

Senior executive engineer, Gerard O’Connor, agreed it is “dangerous” and said there is “a huge drop”.

Cllr Houlihan pointed out that the next car involved in an accident there “is going to go straight in over it”.

“This is a serious issue – it is on a main road, the safety issue is massive. There definitely should be a crash barrier there,” he said.

Cllr Eddie Ryan said the bridge is “perilous” in its current state.

“Even a barrier of any description would help,” he noted.

John Madden said the margin between the edge of the road and the embankment is extremely narrow.

“You could try to put some form of a concrete barrier there as a temporary measure.”

Paul Crowe, director of travel and transportation with the local authority said bridges are “crying out” for investment.

He suggested that a report should be carried out on the condition of the bridge.

Cllr Eddie Ryan pointed out how the bridge in Oola was reduced to one lane for a long time while it was being replaced.

Cllr Mike Donegan said if Garrienderk Bridge needs to be reduced to a one way system then it will have to be made one way.

“If the engineers say it has to be one way, then we have no choice but to do it.”