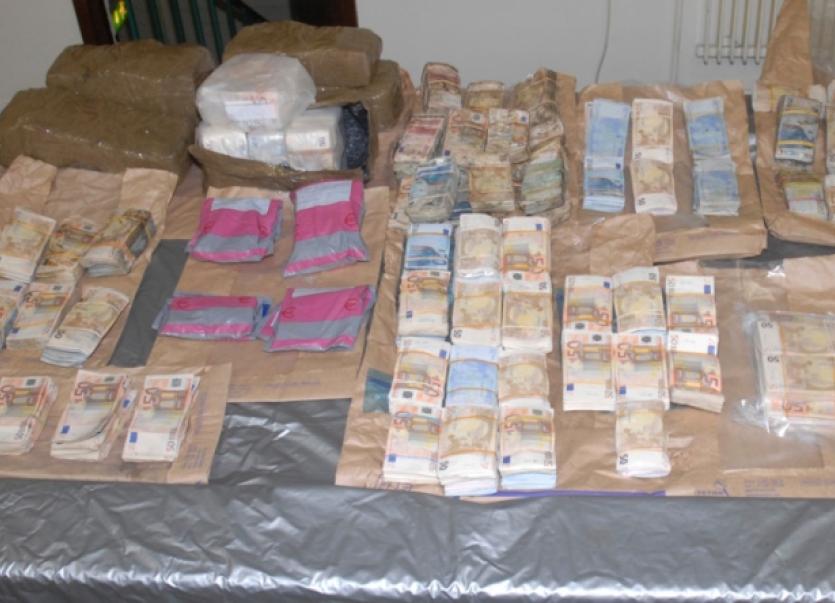 GARDAI are expected to seek a court order in the coming weeks to allow them retain more than €1m which was located in a field in County Limerick at the weekend.

GARDAI are expected to seek a court order in the coming weeks to allow them retain more than €1m which was located in a field in County Limerick at the weekend.

The cash, which was in a variety of denominations was seized during a major garda operation at a property near Castleconnell on Saturday afternoon.

Gardai suspect two men who were arrested during the operation were in the process of digging up the money which, according to sources, was buried around six feet underground.

In addition to the cash found in the ground, a significant amount of cash was also discovered in a container, which is located on the lands at Portcrusha near Castleconnell.

Some of the money was recovered from a tumble-dryer as it was being dried out by the suspects.

Because of the size of the haul, it took investigating gardai more than two days to sort and count the cash, which totals around €1.25m.

Two men who were arrested and questioned about the cash were released without charge.

Both were arrested on Saturday afternoon under the provisions of the Criminal Justice (Money Laundering and Terrorist Financing) Act 2010.

They were later questioned at Henry Street garda station under drug trafficking legislation.

One of the men - a 43-year-old from the Castleconnell area was released late on Sunday night while the second man was released earlier this evening.

The 53-year-old, who is from the Ballynanty area of Limerick city is known to gardai and has a number of previous convictions including one for drug dealing more than a decade ago.

He has connections to a drugs gang, which is based on the northside of the city.

A mechanical digger was also found during Saturday’s search operation, which was led by members of the divisional drugs unit assisted by gardai from the crime offices at Henry Street, Roxboro Road and Mayorstone Park garda stations.

The search was the culmination of a major garda operation, targeting the activities of organised criminals in the city, which has been ongoing since July.

Gardai are forensically examining the cash in an effort to establish where it came from and they are likely to seek a formal court order which would allow them to keep the money for up to three months.

The head of the Limerick garda division, Chief Superintendent David Sheahan, says while investigations into the discovery of the cash are ongoing, the search operation was a success.

“It was an excellent outcome to a difficult and complex investigation,” he said.