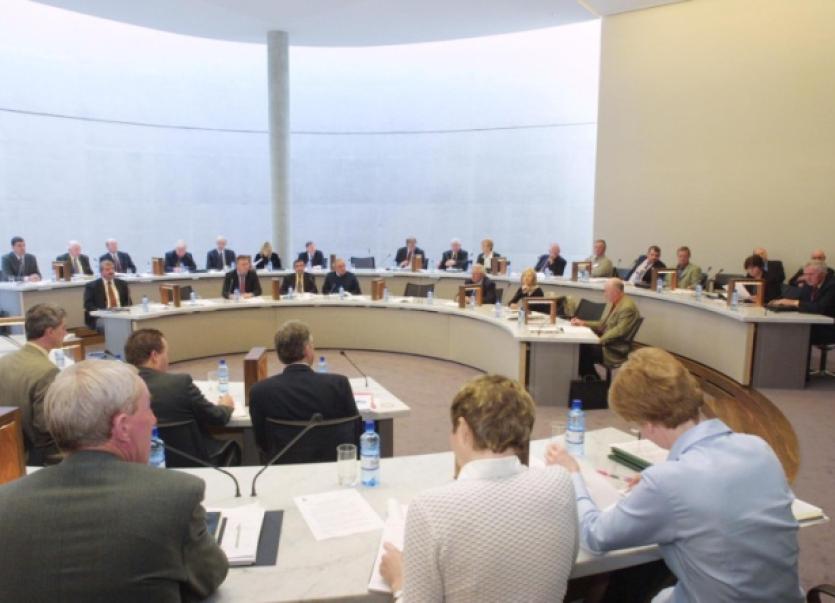 AS Limerick County Council considered its last-ever budget this Tuesday, ending an historic run of 114 years, there were opposition calls to postpone the final vote.

AS Limerick County Council considered its last-ever budget this Tuesday, ending an historic run of 114 years, there were opposition calls to postpone the final vote.

There were too many unknowns, Cllr Michael Collins, Fianna Fail leader in the council chamber said, and he claimed the budget was being “guillotined and bullied through”.

This claim was strongly repudiated by Cathaoirleach John Sheahan who later described Fianna Fail’s behaviour as “sabre-rattling and scaremongering.” And Fine Gael leader, Liam Galvin angrily accused Cllr Collins of failing to turn up for a party leaders’ meeting on the issue.

However, the “big elephant in the room” for Fianna Fail councillors was concern over Irish Water which is due to take over from the council and provide water and waste water services from next year.

In the 2014 budget, the council estimated it would be paid €14.4m by Irish Water to supply water.

However, as Cllr James Collins pointed out, this was subject to the manager signing a service agreement.

“We are estimating income and we don’t know the terms of the contract,” he pointed out. “I don’t think it would be prudent to pass a budget today.”

He was also concerned about the possible implications for the budget of the Local Government Bill currently going through the Dail. The powers of councillors will be diluted, he warned, but his main concern was whether the new legislation might make it mandatory to charge rates on empty commercial premises.

Cllr Kevin Sheahan’s concern was that the council was handing over huge assets to Irish Water and there was no claw-back if Irish Water was ever sold on.

But Cllr Bill O’Donnell argued that any agreement with Irish Water would not have any effect on the council budget.

City and county manager Conn Murray told councillors that the assets transferring from Limerick County Council to Irish Water were valued at €549m while the liabilities of €15m would also tranfer.

“The provision of €14m will allow us to provide water in January,” he said but agreed that the service agreement had yet to be signed and ratified.

It would, he explained, be a 12-year agreement at the end of which, the question of whether those working in water supply would transfer across to the new body. “The pension liability will go at that time and that issue hasn’t been fully resolved,” he added.

Earlier, when introducing the budget, Mr Murray acknowledged it was an historic meeting but said Limerick now needs to prepare for her next journey, and to be given a mandate that will enable Limerick to develop as the true capitol and main driver of the Mid-West.

But in preparing for the future, Mr Murray added, we must acknowledge the past. The last few years had seen €21.6m cutf rom the budgets of Limerick city and county councils, he said, and income had fallen by a “staggering €70m”.

“It did affect our ability to deliver services,” he said. Since 2007, staff numbers in the council have fallen from 824 to 619.

One of the main features of budget 2014 is the maintaining of the commercial rate at the 2010 level which at 59.9 is the ninth lowest in the country. “Limerick has bcome of the most competitive places to do business,” Mr Murray said.

Alluding to the City of Culture and to the new Limerick Marketing Company which will begin work in January, he said: “We have an enormous opportunity to establish the face of Limerick in a new way.”

When the votes were counted on the 2014 budget, there were 12 in favour, one against and eight abstentions. Cllr Eddie Wade voted against because there were no funds for new street lights.