Limerick doctors ‘regret’ having to strike 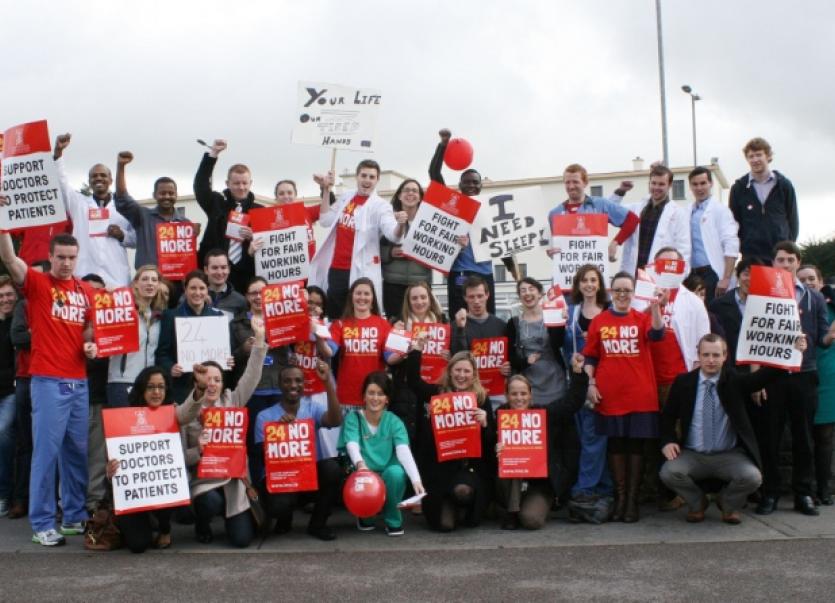 A 12-HOUR picket outside the gates of University Hospital Limerick was a walk in the park compared to 30-hour shifts junior doctors routinely put in, according to Dr Niall Kelly.

A 12-HOUR picket outside the gates of University Hospital Limerick was a walk in the park compared to 30-hour shifts junior doctors routinely put in, according to Dr Niall Kelly.

A registrar in the surgical department, Dr Kelly said Tuesday’s strike by the IMO had the support of the public in spite of the 325 operations and appointments which had to be cancelled and rearranged across the Mid-West.

“It is regrettable that it happened,” Dr Kelly said of the industrial action to highlight dangerously long hours worked by non-consultant hospital doctors (NCHDs).

“Ideally the HSE would have met our proposals at the negotiating table and it wouldn’t have come to action. For what it’s worth, we apologise to patients that it has happened but we would call on them to talk to their local politicians and TDs and get political pressure back on the HSE to make the changes so that they ultimately get a better health service and the health service they deserve. They don’t deserve to be treated by doctors who are tired and potentially could be making mistake. They deserve a safe, modern, first world healthcare system.”

Dooradoyle, he said, was one of the busiest acute hospitals in the country and one where NCHDs were routinely required to breach the EU working time directive.

“I would argue it is at least as bad as the Dublin hospitals. With the changes to the hospital network in the region over the last few years, the volumes we see on an overnight basis means that where previously where an NCHD who may have been on call might have been able to get three or four hours rest before going on to the next day, they are nearly guaranteed to be up all night now and running out of time to get through all their work they have lined up for the night between patients coming through the emergency department and patients on the wards.

“It just seems to have got busier over the years I’ve been here. The day job is just as busy the next day and you are running into the 28 and 36-hour shifts well into the day.”

“If a truck driver isn’t safe to drive without taking rest periods, why is a doctor any safer to practice medicine when going on for that long,” said Dr Kelly.