Mayor of Limerick’s appeal to ‘Bin it your Way’ 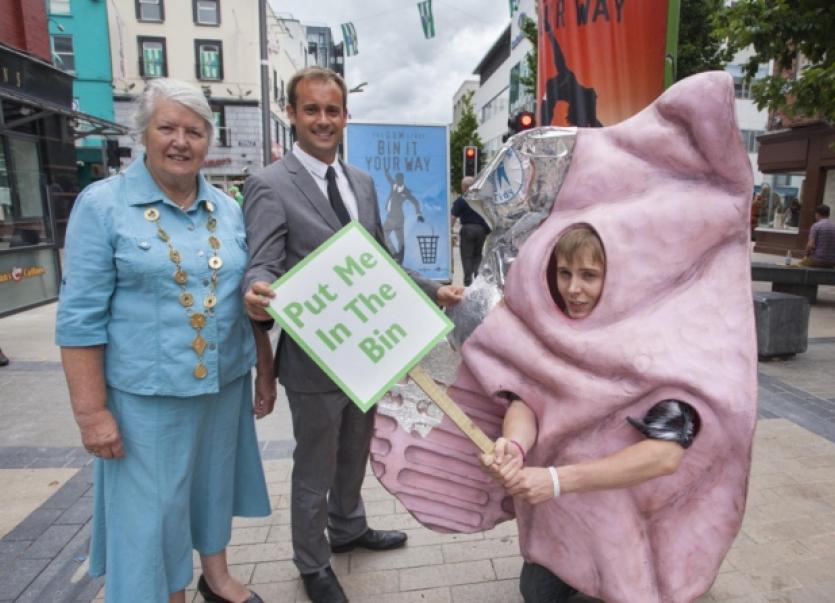 THE Mayor of Limerick is backing a major campaign against gum litter and is asking Limerick people to “Bin It Your Way”.

THE Mayor of Limerick is backing a major campaign against gum litter and is asking Limerick people to “Bin It Your Way”.

This is the second year of the three-year campaign and Limerick is once again an active participant in the high-profile national Gum Litter Taskforce (GLT) awareness campaign.

The aim of the campaign is to promote the correct disposal of gum litter with the help of the GLT ad-bikes and local authority representatives who have been distributing gum raps and other campaign materials over the past few weeks.

A survey conducted at the end of the first year of the campaign showed a 28% reduction in gum litter nationally and a significant improvement in attitudes towards gum litter with 92% of people surveyed viewing irresponsibly disposed of gum as litter.

“This campaign delivers a serious message in a lively and creative way about keeping our streets and footpaths clean of gum litter so I’m delighted to lend my support to this innovative and catchy campaign,” said the Mayor of Limerick, Cllr Kathleen Leddin.

Paul Kelly, chairman of GLT, outlined a number of new elements , which have been introduced to the “Bin It Your Way” campaign.

“This year we have TV advertising and on pack messaging in addition to the schools education programme, point-of-sale material around the country and sponsorship of three awards in the TidyTowns competition,” he said.

A mobile application gaming app has also been developed and is now available to download free from the App store.

“This app is a fun way to promote the campaign message and encourage the public to dispose of gum responsibly,” said Paul Kelly.

“It is also a mark of how successful and well received the campaign was last year that we have an additional seven local authorities participating in this year’s campaign,” he added.