Swimmers warned over Dusty the dolphin 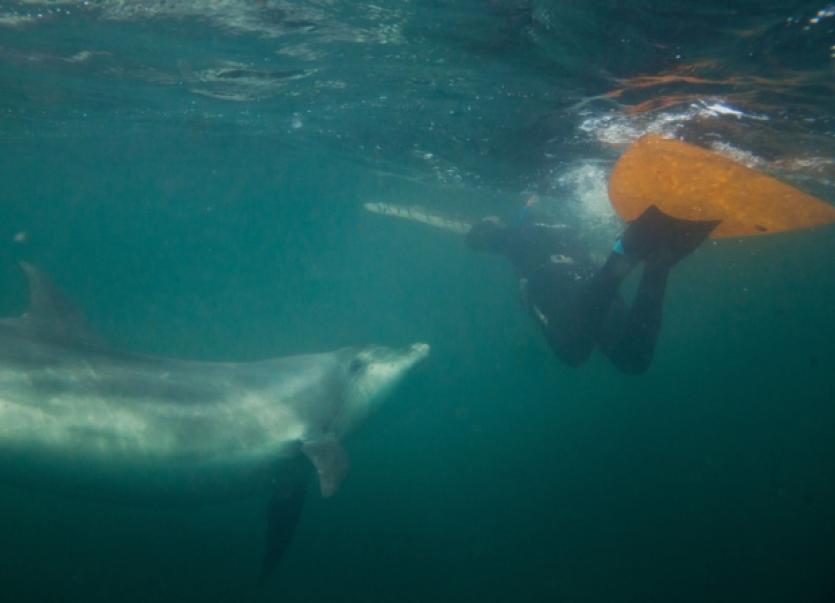 ANY SWIMMERS trying to interact with Dusty, Doolin’s now infamous dolphin, will be removed from the water for their own safety from this weekend after a spate of injuries suffered by swimmers.

ANY SWIMMERS trying to interact with Dusty, Doolin’s now infamous dolphin, will be removed from the water for their own safety from this weekend after a spate of injuries suffered by swimmers.

A group called Dolphin Days Ireland had advised: “If you are planning to visit Doolin this weekend with the intention of interacting with Dusty the wild bottlenose dolphin, we would like to make you aware that Doolin lifeguards will remove all swimmers from the water.

“Dusty needs to be left in peace, she has been over crowded of late due to the good weather. Please consider her welfare and well being. You can watch her from the land and we ask you not to make your way down the steps or slipway to her. Please respect the wishes of the lifeguards, ferry operators and local businesses as well as the Irish Whale and Dolphin Group, us and all the long term swimmers of Dusty.”

‘Dusty’ has courted attention and grabbed headlines since she landed in Clare waters nearly a decade ago.

In fact, she was named after the famous British pop singer of the 60s, Dusty Springfield, whose ashes were scattered off the Cliffs of Moher. But as far back as 2004 there have been reports of Dusty “trying to drown a Frenchwoman by pushing her out to sea when she tried to stop the mammal hassling a young boy in the water”, a newspaper report at the time claimed.

Now, after a spate of apparent ‘attacks’, local groups are warning visitors to the area to respect the dolphin as a wild animal and not as a pet, despite the friendly connotations of the mammal.

“Dusty is a magnificent creature and it can be a fantastic experience to get in the water with the dolphin. The dolphin should also be respected. She can be temperamental at times. She generally dislikes to be touched but is happy to swim beside you. If you have a camera, bodyboard or anything in the water with you she will probably try and take it off you,” one website in Clare warned before these recent incidents.

Believed to be about 12-14 years old, Dusty is about 10ft long and can often be seen around White Strand, Fanore and Green Island. This week a fourth person was reported as being injured by Dusty.

The Irish Whale and Dolphin Group (IWDG) has erected warning posters at Doolin pier since an incident on July 19.

In the most recent incident, a woman said she was charged at by the bottlenose dolphin as she left the water after a swim, struck her in the kidney area, knocking her over and leaving her winded.

The woman was then taken by a HSE ambulance to the University Hospital Limerick.