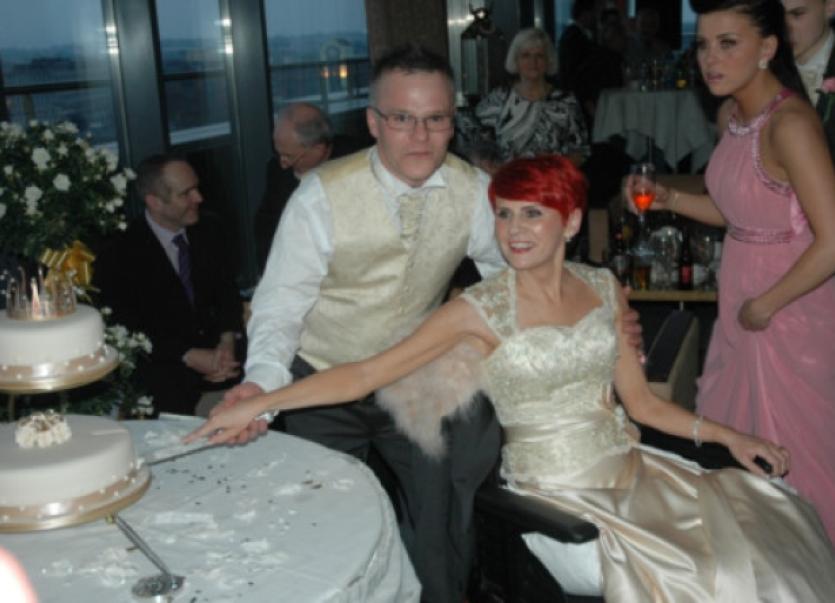 LIKE with most couples, the wedding day of Kathy and Glen O’Brien was one of the happiest of their lives.

LIKE with most couples, the wedding day of Kathy and Glen O’Brien was one of the happiest of their lives.

Tragically, it was one of their last days together as Kathy O’Brien (née O’Keeffe) died just two weeks later.

The mum of two – a long-time Limerick Animal Welfare sanctuary volunteer in Kilfinane – had beaten cancer twice but it took her life a couple of months after her 40th birthday.

Her beloved husband, Glen, said once they heard the terminal diagnosis they said to each other, “Let’s get married”.

“We were together over 20 years. We eventually did become husband and wife, if only for a short time. We had plans to get married so many times but they always fell through. We were just the kind of people that said if it’s not broken don’t fix it,” said Glen.

“They were brilliant in Milford, they got Kathy well for the wedding and it was held in our parish church in Caherdavin.

“It was fantastic for her, she really enjoyed it. It was so poignant for her. She walked down the aisle with her dad, Patrick, which she didn’t think she would be able to do. The memories will last forever,” he added.

Glen and Kathy’s 21-year-old daughter, Nadine, was her bridesmaid, while their son Jessie Aaron, 17, a groomsman.

Afterwards, the reception was held in the Strand Hotel, and Glen says the wedding album will be treasured.

Kathy was first diagnosed with cervical cancer in 2009.

“She beat it twice but the third time it got her. She had been through the mill with chemo, radiotherapy and a new treatment in Dublin that was terrible on her.

“No matter what was asked of her she did it, hoping to beat it. Everything that could possibly be done was done.When it came back after the first time it was so aggressive. I spoke to a consultant in Milford just before she passed. He told me that normally these aggressive cancers might plateau out, but he said Kathy’s kept getting more aggressive,” said Glen.

An animal lover all her life, Kathy never knew where to volunteer. She got in touch with Limerick Animal Welfare in Kilfinane and they became like a second family. Glen says his wife used to keep dog food and a lead in her car in case she came across any strays. She would pick them up and bring them to the sanctuary.

“For a full year there were weeks when she was there five days a week volunteering. It really brought her out of herself. She loved going out there,” said Glen.

And Limerick Animal Welfare staff loved having her. Marie Quirke passed on their sincere condolences.

“Kathy, along with her sisters, was a volunteer with LAW. She had a great affinity with animals. Long walks, grooming and tender loving care were always in great supply when Kathy visited.

“The dogs loved her and shrieked with joy when they heard her voice. After a day of volunteering Kathy made sure each dog had a clean shiny kennel and a warm comfortable bed for the night. She gave each dog a treat and a pat on the head before leaving her tiny wellies in the kennels for her next visit,” said Marie. All this while Kathy battled cancer. As well as volunteering through the day Kathy often brought dogs home at night.

“Many of the very young animals travelled to Kathy’s home to be bottle fed and looked after until they were ready for rehoming. Some managed to worm their way into her heart to find their forever homes. Through her good days and bad days the animals helped to keep Kathy focused on living life to the full. Her dream was to find homes for countless number of unwanted dogs. Kathy also did lots of home visits. Many will remember this lovely lady who offered help and advice if needed to settle a dog into its new home.

“We look to the skies at night and think of Kathy, we know she is in a good place because Kathy was a very good person.”