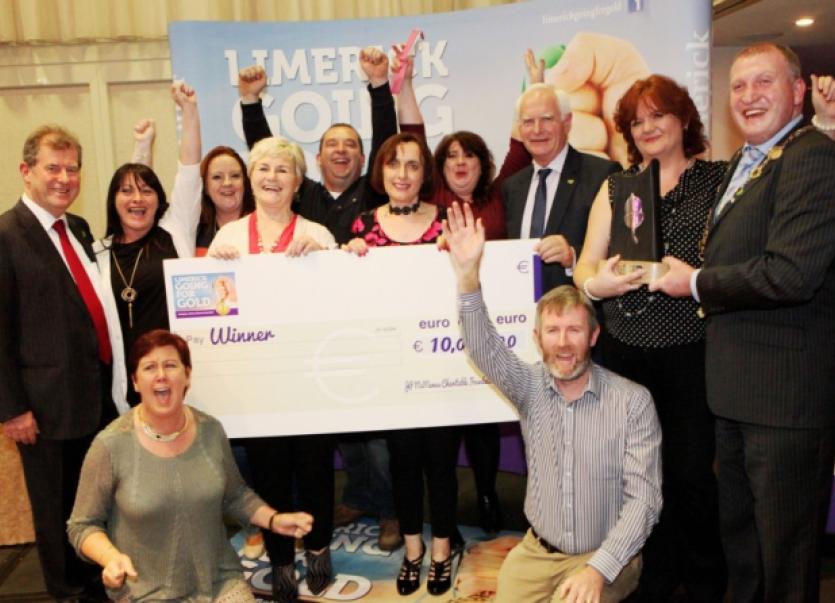 CASTLECONNELL has been crowned the overall winner of this year’s Limerick Going for Gold competition.

CASTLECONNELL has been crowned the overall winner of this year’s Limerick Going for Gold competition.

There were jubilant celebrations at the Strand Hotel on Tuesday night after the village won the top prize of €10,000 at the grand final.

Funded by the JP McManus Charitable Foundation, this year’s Going for Gold initiative carried a total prize fund of more than €76,000 and was extended county-wide for the first time.

It was supported by Limerick City and County Council, the Limerick Leader, Live 95FM and the Parkway Shopping Centre.

A total of 36 communities were shortlisted for the competition, with six qualifying for the grand final through public text votes, A further six communities qualified after being selected by the panel of local judges.

JP McManus, his wife Noreen and the Mayor of Limerick City and County, Cllr Liam Galvin, also attended the event, which was hosted by Richard Lynch of ILoveLimerick.com

“Limerick Going for Gold’s mission is to make Limerick a brighter, better, cleaner place to live, work and visit and every community who participated in this campaign, as well as the event sponsors and supporters continue to contribute to that mission,” said Mayor Galvin.

Gerry Boland of the JP McManus Charitable Foundation said it was “considered important that recognition be given to communities, for their contribution to the environment. They are role models for all of us, leading by example.”

Adare was voted the overall winner of the Limerick in Bloom category while Ardpatrick was runner up.

A number of other awards were also presented on the night including best Front Garden which was presented to John McCarthy, Kilteely.