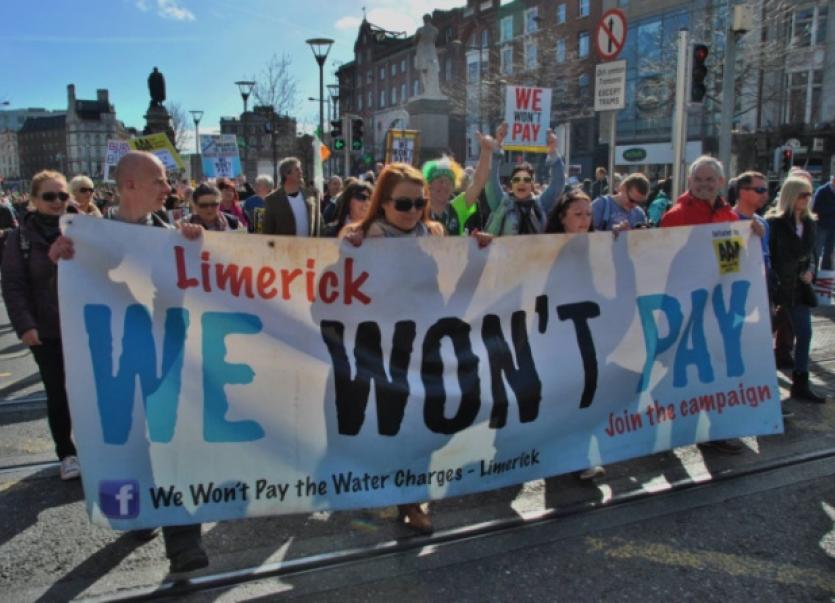 LIMERICK was represented at Saturday’s anti-water charges rally in Dublin, with over 100 people travelling to the capital.

LIMERICK was represented at Saturday’s anti-water charges rally in Dublin, with over 100 people travelling to the capital.

They joined a reported 80,000 people for the public protest, organised by the Right2Water coalition.

And this Wednesday night in Limerick, Brendan Ogle, the organiser of the massive rally will address the first public meeting of the Right2Water group in Limerick.

All are welcome at the meeting, which takes place at the Absolute Hotel from 7.30pm.

Also joining Mr Ogle will be local councillors Maurice Quinlivan and John Loftus, plus Billy Wall of the OPATSI union.

Sinn Fein councillor Quinlivan, who was in Dublin with wife Sue and party activists, described Irish Water as a “toxic quango”.

“It is very clear that the Government has lost the debate on these odious charges and it is past time to scrap them and finally give working families a break. I have no doubt that there will be further huge rallies until the Government really listen and abolish water charges,” he said.

There will also be a further anti-water charges march in Limerick on Saturday, April 11.

Cllr Cian Prendiville has called on those taking part to bring newly issued bills from Irish Water so they can be put in an incinerator.

“From there we will be launching a major door knocking campaign over April and May, where we want to knock on every door and have meetings in every community in the city. We want to reassure people who may be scared. The government can’t take this from your wages, or cut your water pressure,” he said.

Anti-Austerity Alliance activist David Vallely said Saturday’s turnout puts paid to any suggestion the anti-charges movement is “on the wane”.

“What you saw from the turnout last Saturday is the anger exists, and the government is faced with mass non-payment. This government has a huge battle on its hands,” he added in words reflected by Cllr Quinlivan.