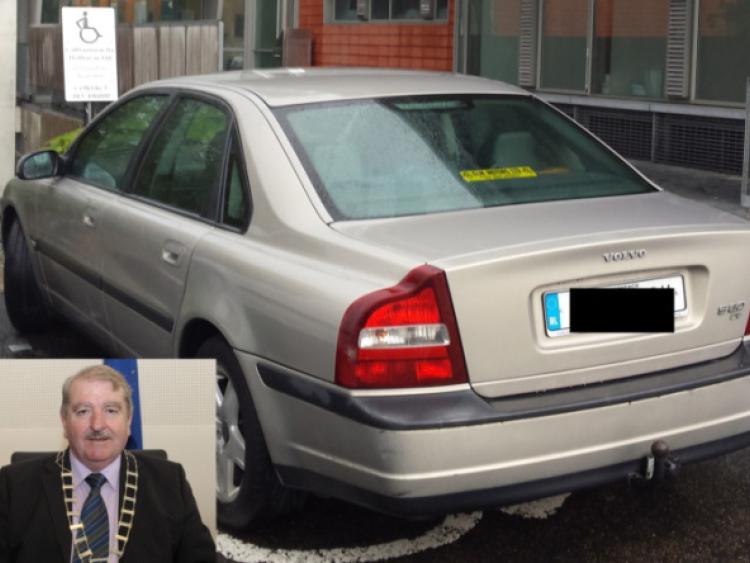 MAYOR of Limerick City and County Kevin Sheahan has apologised for using a disabled parking space outside County Hall.

MAYOR of Limerick City and County Kevin Sheahan has apologised for using a disabled parking space outside County Hall.

The car belonging to Limerick’s first citizen was photographed in the parking space adjacent to the council building’s entrance.

When contacted by the Limerick Leader, Mayor Sheahan admitted using the space and apologised.

“I am not going to tell a lie, I am not going to try and dodge it,” he said. “But I do think it is a bit harsh that someone had nothing better to do than take a photograph of my car at a time when there were at least two other parking spaces vacant in the same place. So parking in one for five minutes or less was not going to deprive anybody in my opinion.”

But the mayor has come under fire from northside councillor Cian Prendiville, and disability advocates.

Mr Sheahan, the first Mayor of Limerick City and County, said: “I would certainly apologise for causing anybody to deprive them of their rights or cause them any inconvenience.”

The wheelchair-bound woman who took the picture, but did not wish to be identified, said she was “horrified” to see Mayor Sheahan’s car in the space.

“It’s insulting, and he is totally disrespecting the disabled people of Limerick,” she said.

Although the mayor has apologised, Limerick’s Carer of the Year, Damien Hickey – who relies on disabled spots for his wheelchair-bound mother – does not feel it is sufficient.

Cllr Prendiville criticised Mayor Sheahan for his “giving out” about the person taking the picture of the motor.

“It is a very unfortunate comment to be giving out about a person who reported his offence. She was only trying to access council services. He was totally in the wrong, and should acknowledge that. She was totally correct in reporting the matter,” the Anti-Austerity Alliance member said.

“There are designated spots for the mayor and councillors which he should use instead of disabled parking spots,” he added.

“There are thousands of people in Ireland with physical disabilities, driving or travelling as a passenger on a daily basis. People with limited mobility who travel by car need to be able to park and have sufficient space to enter and leave their vehicle safely.”

It is not the first time the misuse of disabled parking spaces has been highlighted.

Just before Christmas, Mr Hickey highlighted the fact that taxi drivers at the Castletroy Shopping Centre were using disabled parking bays. And in the run up to the local elections last year, European election hopeful Lorraine Higgins was found to be using a disabled spot.