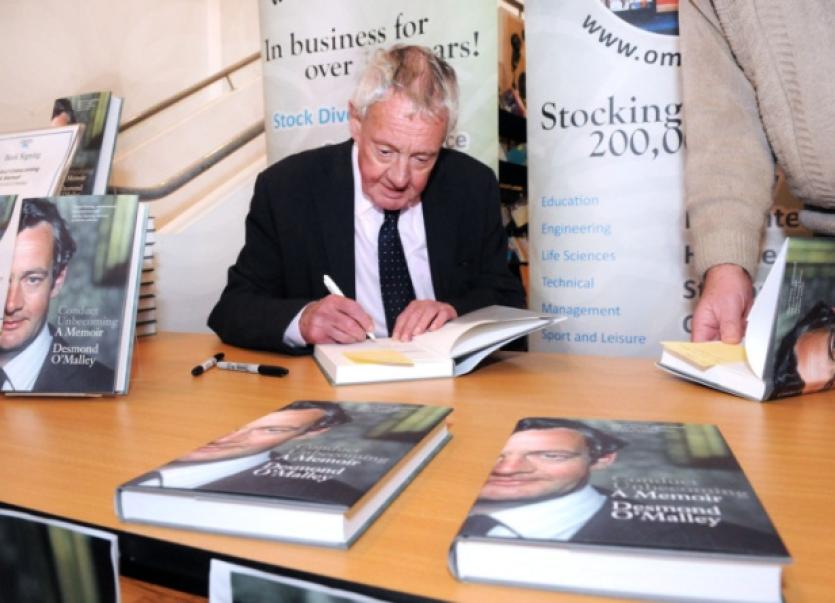 FORMER minister Des O’Malley believes the antics of the cabal around Charles Haughey during the 1980s have put younger generations off politics.

FORMER minister Des O’Malley believes the antics of the cabal around Charles Haughey during the 1980s have put younger generations off politics.

The retired Limerick politician’s tussles with Haughey led to the establishment of the Progressive Democrats and the late Taoiseach is a central figure in Mr O’Malley’s memoir Conduct Unbecoming.

He believes Haughey’s abuse of office for self-enrichment encouraged others around him - like Liam Lawlor and Ray Burke.

“They weren’t going to be reprimanded for certain types of activity when they knew the same or worse was going on above them. It was a case of the thing trickling down from the top and as people saw what was happening in a close circle around him, they decided that certain things they may not have done a few years earlier were now found to be OK,” he said.

The single party regime led by Haughey from 1987 to 1989 is described by O’Malley in his book as the most corrupt in the history of the state. And while the controversies over cronyism today were relatively speaking “not such a big deal”, they were indicative of a culture that was allowed to develop in the 1980s.

“The real worry is not so much those who go into politics but those who are frightened off from politics because people of talent and calibre, who should be there for the sake of this country but are not, they don’t want to do it because it has acquired a bad name - and a lot of that happened during the 1980s particularly.”

Mr O’Malley also expressed regret that the type of populist politics he saw the state’s biggest two parties practice in the 1980s is still “alive and well” - with Sinn Fein especially culpable.

“People think they are going to get something for nothing and that is a mistake. That sort of populism is easier to sell it at a time like the present when we are just coming out of a fierce recession and people are feeling the pain. It is easy to be populist but it is not going to solve anyone’s problems,” he said.

A more favourable report card is given to Limerick’s current cabinet ministers.

“Michael Noonan is, I think, doing very well and I wish him well and Jan O’Sullivan also. They have been around a good while. I was lucky that I was a minister at a very young age compared to what they are now. But they are certainly doing their best to face up to the serious problems that are there today. They are not always successful but I hope they will try and get some of the stuff sorted out because the country needs them to.”