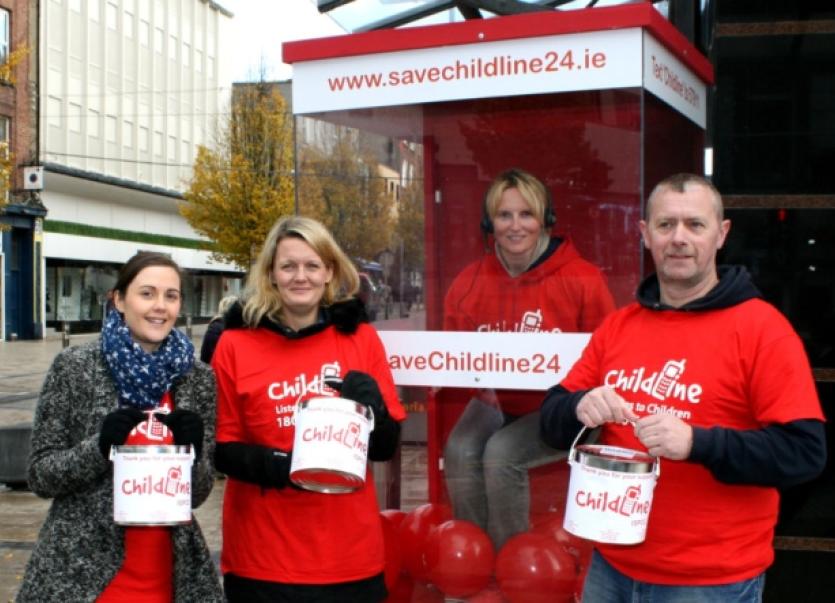 A CHILDLINE campaign took place in Limerick city this week as part of an emergency appeal for funding to prevent the partial closure of the charity’s phone services.

A CHILDLINE campaign took place in Limerick city this week as part of an emergency appeal for funding to prevent the partial closure of the charity’s phone services.

The Campaign Phone-Box Roadshow came to O’Connell Street in a bid to raise awareness of Childline’s plight and its need for €1.2 million to keep the night time service operational.

Alex O’Keeffe, Regional Services Manager West-Mid West Region, said that night is when some of the most vulnerable call for help and the loss of the service would mean the silencing of these children.

“I would have received a call at night from a little boy who was in his bedroom and he was very frightened because he was experiencing and being exposed to domestic violence from his parents,” she explained.

“It was very frightening and he needed reassurance to feel safe and to have somebody listen to him. It is very much about hearing the voice of the child.

“That voice was heard and that voice was valued. It is very much about providing safety and reassurance to the child during a situation where maybe their parents couldn’t find the time for that,” she said.

The loss of the service will mean that 45,000 night time calls could go unanswered in 2015 by Childline.

Childline has been operating in Ireland for 26 years and relies almost exclusively on public donations for its funding. The night time service has grown over the last 15 years to become a critical support to children in distress.

In many instances the late night calls are from children who, due to their domestic circumstances, cannot call at other times of the day.

Childline currently receives 1,800 calls per day, with night time calls accounting for about 11% of volume.

Caroline O’Sullivan, ISPCC interim CEO, said her greatest concern is for children in abusive situations, which accounts for 14% of Childline’s calls.

“These children really need us on a 24/7 basis and thousands of these children will not be heard next year if we cannot raise the funds to keep the night service open,” she said.