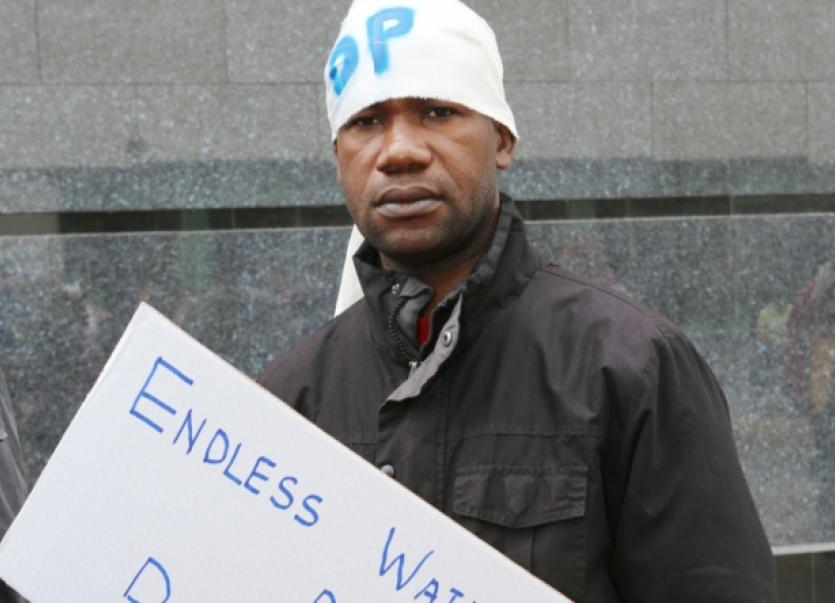 LABOUR’S Cllr Joe Leddin has expressed his support for asylum seekers who are demanding an end to long delays in the direct provision system.

LABOUR’S Cllr Joe Leddin has expressed his support for asylum seekers who are demanding an end to long delays in the direct provision system.

The former Mayor of Limerick joined almost 300 asylum seekers and supporters in a protest in the city, a demonstration sparked by recent tensions at the Mount Trenchard reception centre outside Foynes.

Mount Trenchard is one of a network of centres around the country where asylum seekers are housed while their applications are processed.

A number of residents have been protesting against conditions there, including four who went on hunger strike last week.

Mount Trenchard, said Cllr Leddin, had “proven a litmus test for what is happening around the country”.

He is concerned about lengthy delays applicants for asylum face in Ireland; conditions in direct provision centres themselves and the “lack of accountability” within the Reception and Integration Agency running the centres for the Department of Justice.

“One of single biggest issues is the length of time so many have to wait before there is a decision made on whether they can be granted leave to remain, the first step on the way to naturalisation or citizenship. Some of them are waiting up to 9 or 10 years,” said Cllr Leddin.

Such long waits, during which asylum seekers are barred from the workforce and third level education, were not the norm in the EU and were contributing to “significant health problems among asylum seekers”. He was also aware that not all reception centres were able to cater to “specific dietary needs of certain religions” and that “more often than not those with young children find themselves operating in a cramped room or two”.

Cllr Leddin was also concerned at cases where people who complained about conditions in reception centres were being transferred to centres in other parts of the country with “little recourse to an appeal”.

He was hopeful there would be “some light at the end of the tunnel” and that the system could be overhauled by the new minister of state with responsibility for equality Aodhan O Riordain, who is setting up a commission on such issues.

And Cllr Leddin rejected the characterisation of many asylum applicants in Ireland as bogus.

“I have heard horror stories. I have met people who have seen their parents and members of their family killed literally in front of them. They have fled for a whole variety of reasons and the majority, I have to say, are genuine people who have come here purely from the point of view of personal safety.”