Bishop of Limerick lends hand to sew Garment of Suffering 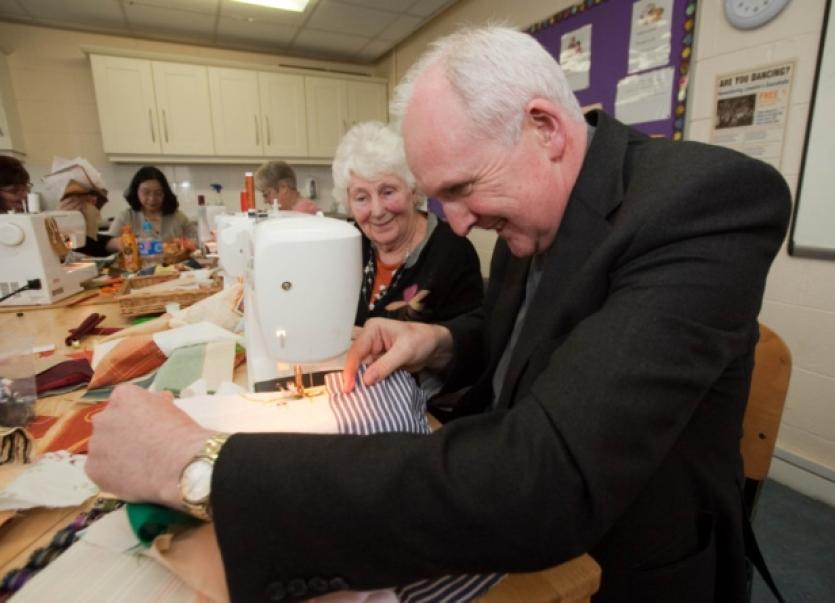 A STITCH in time saves nine, but when women of the diocese saw Bishop Brendan Leahy reach for the sewing machine this week it momentarily pulled a thread in their progress.

A STITCH in time saves nine, but when women of the diocese saw Bishop Brendan Leahy reach for the sewing machine this week it momentarily pulled a thread in their progress.

As part of the upcoming Easter celebrations, Bishop Brendan Leahy sat on a different pew this week, next to Violet O’Flynn and members of the St John’s sewing circle to work on the 50 foot long ‘Garment of Suffering’.

Made from over 1,000 pieces of cloth gathered from the 60 parishes of the Diocese of Limerick, it will be presented during the Good Friday liturgy and placed at the foot of cross to symbolise that sufferings of the faithful are united to the sufferings of Christ. While the group looked on in admiration at his deft work, the Bishop was nonchalant about his nimble fingers.

“It’s 40 years since I sat down at a sewing machine like this,” he remarked to the women, asking where the reverse button was.

The Bishop explained that his ability at the wheel was gleaned from watching his mother sew garments, and told of the delight when an electric sewing machine was brought into their house years later.

This Easter, the Good Friday commemoration and the Easter Vigil celebrations will be broadcast live on RTE from St. John’s Cathedral for the first time in a decade, with hundreds of thousands expected to watch the celebrations

The Easter Vigil Mass will take place at 11pm and will be celebrated by Bishop Brendan Leahy.

The Easter Vigil Mass will also be the first occasion when a new Mass setting composed especially for the Diocese to mark Limerick’s designation as the National City of Culture by Glenstal monk Fr. Columba McCann, OSB, will be performed.

Church of Ireland Bishop of the United Diocese of Limerick and Killaloe, Trevor Williams, who is to retire later this summer after six years, will also participate in the Good Friday commemoration.

“We are delighted to have RTE here to broadcast our celebrations. It’s a privilege for any community and all the more so because of the City of Culture. RTE have chosen to come here for that very reason. Each liturgy is, in a sense, a cultural event. It is an opportunity for Limerick to show solidarity in faith to the nation at this most special time of the year,” he said.