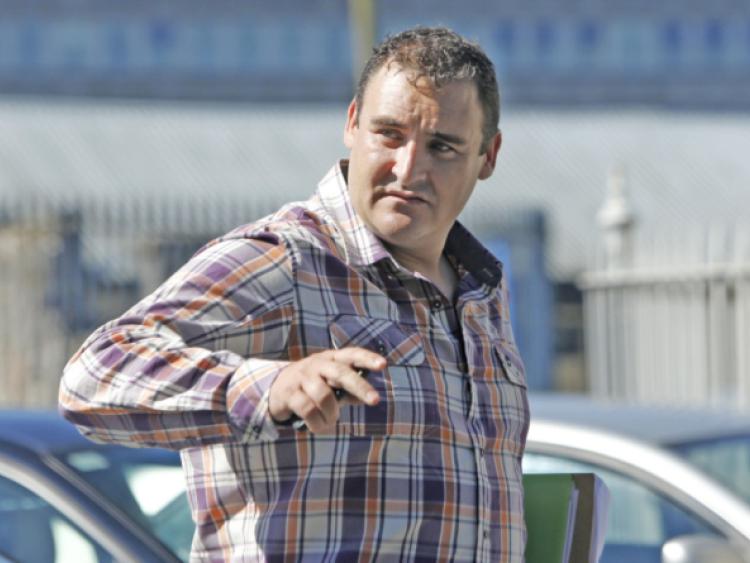 THE case of Limerick man who was extradited from Bulgaria last month to face serious charges has been sent forward for trial.

THE case of Limerick man who was extradited from Bulgaria last month to face serious charges has been sent forward for trial.

Vincent Collopy, aged 35, who has an address at St Senan Street, St Mary’s Park was brought before Limerick Court last month - a number of hours after he was extradited from Bulgaria.

He was arrested by police in that country on foot of a European Arrest Warrant which was issued by the High Court in 2011.

The defendant is accused of “intimidating or putting William Moran in fear with the intention of obstructing, perverting and interfering with the course of justice” at Island Road, Limerick on June 9, 2010.

He is also is charged, with threatening to kill the 51-year-old on the same date.

In 2011, Vincent Collopy’s brothers Kieran Collopy and Damian Collopy, of St Ita’s Street, St Mary’s Park, Limerick, were both jailed for five years for threatening to kill or cause serious harm to Willie Moran on April 14, 2010.

They alleged that Mr Moran owed up to €5,000 to their late brother Philip Collopy, who accidentally shot himself in the head in March 2009.

During the bail hearing, the court was told that Willie Moran was under 24 hour armed garda protection up to last year and that this is under ongoing review.

The court also heard that Collopy has lived in the UK and Bulgaria and holidayed in Spain since he left Ireland four years ago, but he has always travelled under his own passport.

Bail was granted on a number of conditions including that Collopy stays away from the alleged injured party Willie Moran.

On Tuesday, the Book of Evidence in the case was served on the defendant by Garda Shane Hayes.

Inspector Dermot O’Connor said the Director of Public Prosecutions consented to the matter being sent forward for trial to the next sitting of Limerick Circuit Court.

Solicitor John Devane, defending, asked for legal aid to be extended to include a barrister and a senior counsel commenting that it is an appropriate case given the nature of the charges.

After issuing the Alibi warning, Judge O’Kelly remanded the 35-year-old on continuing bail subject to a number of strict conditions.

He must live at his home address, sign on daily at Henry Street garda station and he must not have any contact with the alleged injured party.

He must also stay out of the Rhebogue area of the city pending the conclusion of the proceedings.

Mr Collopy’s mother Bernie Collopy was approved by the Court as an independent surety.

Last week she lodged €3,000 in cash with the Court and on Tuesday, Judge O’Kelly was told she has provided an undertaking to her bank that the balance in her account will not be reduced below €6,000.

Judge O’Kelly also ordered that Collopy surrender his passport and any travel documents and Bulgarian or UK identity cards.

The case is due to come before Limerick Circuit Court on July 29, next when a date for hearing will be set.