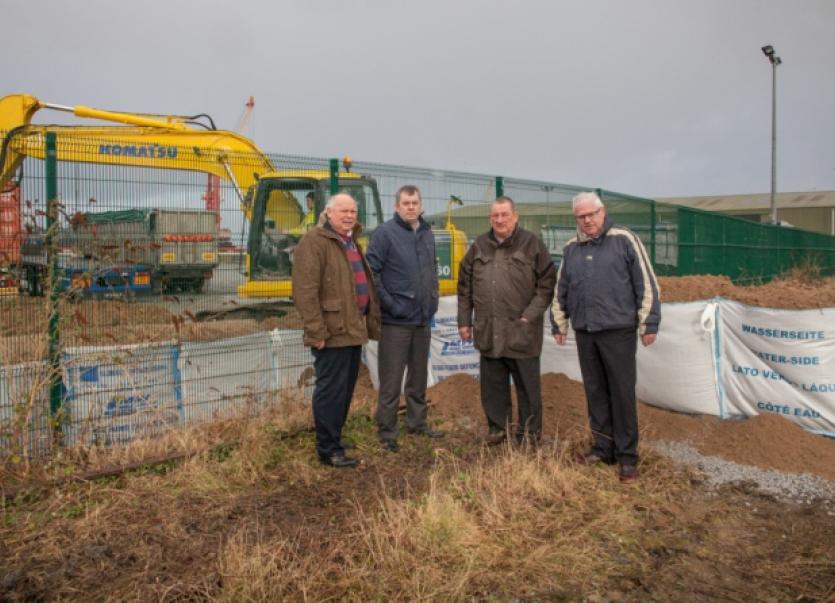 AN innovative flood defence system, currently in use in the US, Canada, Britain and Afghanistan, has been put in place in Foynes where this weekend’s potential high tides have sparked fears of a recurrence of the floods which affected almost 40 homes and businesses in early January.

AN innovative flood defence system, currently in use in the US, Canada, Britain and Afghanistan, has been put in place in Foynes where this weekend’s potential high tides have sparked fears of a recurrence of the floods which affected almost 40 homes and businesses in early January.

It will be the first time the system, pioneered by Roscommon-based company Global Defence Solutions, has been used in Ireland and the company’s chief executive officer Shane Curran is confident it will pass the test.

The “mobile concertainer wall”, which is sand-filled, is almost a metre high and a metre deep and runs for 100 metres between the harbour area and the railway tracks. It was put in place in just six hours and is intended to replace an existing block wall, forty feet of which were breached on January 3.

As a result, the tidal surge poured from the rear into bars, shops and homes on the main street.

Shannon Foynes Port Company opted for this new system, Mr Curran explained, because it is more economical, quicker to erect and, crucially, much stronger than any conventional wall could be.

It also protected a major water treatment plant during Hurricane Irene and is being used in flood defence in Germany, Holland and elsewhere while Concern is using it in Afghanistan. It is Irish designed and made, Mr Curran pointed out proudly, and has won a number of international awards.

Meanwhile, Limerick County Council engineer Pat O’Neill told Rathkeale area councillors last Wednesday that the council had met with Shannon Foynes Port Company and the OPW following the flood in Foynes. They had agreed that the immediate task was the repair and strengthening of the wall which had been breached.

“That was not a wall to hold up a tide,” he said and the port company had undertaken to carry out that work.

As a medium term solution, the council would be applying to the OPW to fund other flood defence works in Foynes, Askeaton, Glin and Ballysteen, he said. However, he explained, the CFRAMS, the body charged with mapping flood risk nationally and due to report in 2015 or 2016, would indicate what needs to be done in the long-term.

Mr O’Neill said Foynes will be a very high priority for OPW funds because there were people involved.

“This was the most serious incident in the country,” he said.

He did not think the European Stability Fund could be drawn down because the funds they were seeking were for flood defence and not for damage done.

“Emotions are running very high in Foynes,” Cllr John Sheahan warned, while Cllr David Naughton pointed out that in Askeaton, upriver flooding needed to be addressed as well as quayside flooding.

And he proposed they also apply for funds to prevent coastal erosion. Cllr Kevin Shean pointed out that 30 acres in Ballysteen were now constantly under-water and repairts needed to be carried out to remedy this.