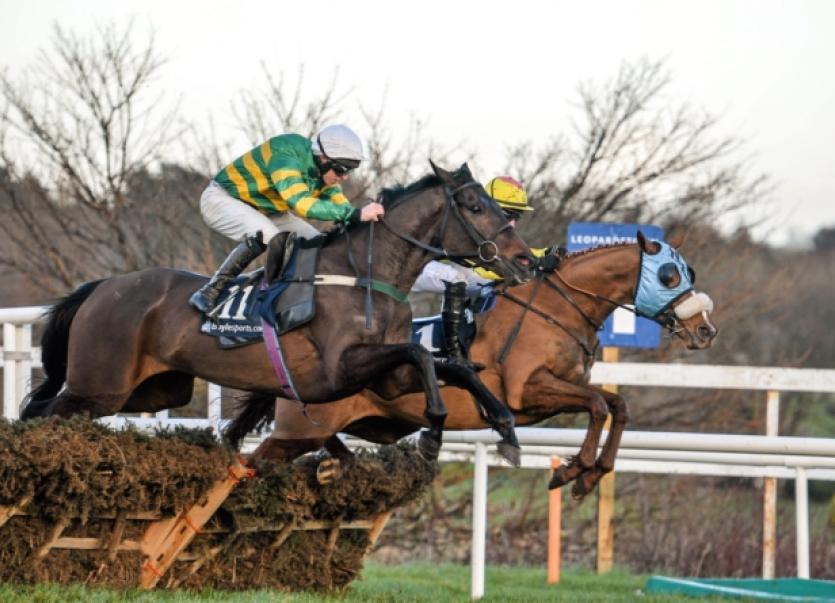 TWO leading County Limerick horse trainers are “on cloud nine” after landing two of the biggest wins on the racing calendar.

TWO leading County Limerick horse trainers are “on cloud nine” after landing two of the biggest wins on the racing calendar.

Bruree-based Enda Bolger enjoyed what he has described as the biggest win of his career when Gilgamboa won the fiercely-competitive Boylesports.com Hurdle at Leopardstown on Saturday while on Sunday, the Charles Byrnes-trained Trifolium landed the Arkle Novice Chase under Bryan Cooper.

“We are still on cloud nine,” said Enda of the Gilgamboa success story which he described as “a real team effort”.

Having just his fourth start under Rules, the JP McManus-owned six-year-old was in the perfect position throughout the race for Mark Walsh.

Enda, who is better known for his handling of cross-country specialists, said much of the ground work which laid the foundations for Gilbamboa’s success was done by Jack Bennett of Bruff, and Croom’s JT McNamara who won on him at Thurles in his early racing days.

“They did great work with him and he just kept progressing,” said Enda of the dark bay who can count a very famous face as one of his fans.

The horse is named after Bruce Springsteen’s assistant, Gil Gamboa, and both Gil and ‘The Boss’ are watching his progress with interest.

“Gil is having great craic out of him. He is able to get At The Races on his computer,” Enda explained.

“Bruce is well aware of him because Gil shows him the videos,” he added.

While no decision has been made on whether to let the Kieran McManus-bred horse bid for another major prize in the Betfair Hurdle at Newbury on February 8, he will be entered in a number of races for the Cheltenham Festival and Gil might even be making the trip from the US to see him in action.

When asked to describe the horse, Enda quipped: “If he was a human being he would be Brad Pitt! He is a real stunner.”

“We all got a great buzz out of him. It’s great to train him for JP and he was bred by Kieran McManus. It’s a real Limerick story.”

Meanwhile, Ballingarry-based Charles Byrnes said while he did expect a big run out of his charge, Trifolium, in the Arkle Novices Chase on Sunday, he was a bit taken aback that he actually won.

“We did expect him to come fairly close,” he told the Leader.

“He was in very good form. The plan now is to keep going for Cheltenham in six weeks. It was looking bleak up until Sunday but there is a bit of a buzz again.

“The bookmakers would have shortened him up naturally after the good run. It was a Grade One race. Every win is vital but to win a Grade One is premiership stuff. Bryan Cooper is the new stable jockey for Gigginstown and there is no doubt he is a top man.”

Bryan, Charles said, won on Trifolium in Thurles about six weeks ago and “was hugely impressed with him that day”.

There was further satisfaction for Charles when Sea Light – owned by the 12-strong Come Home Sober syndicate from County Limerick, – came fourth in the Boylesports.com Hurdle.

“He was fourth there in the big one and they all backed him each way and they all won some small few quid so they were all happy,” said the trainer.