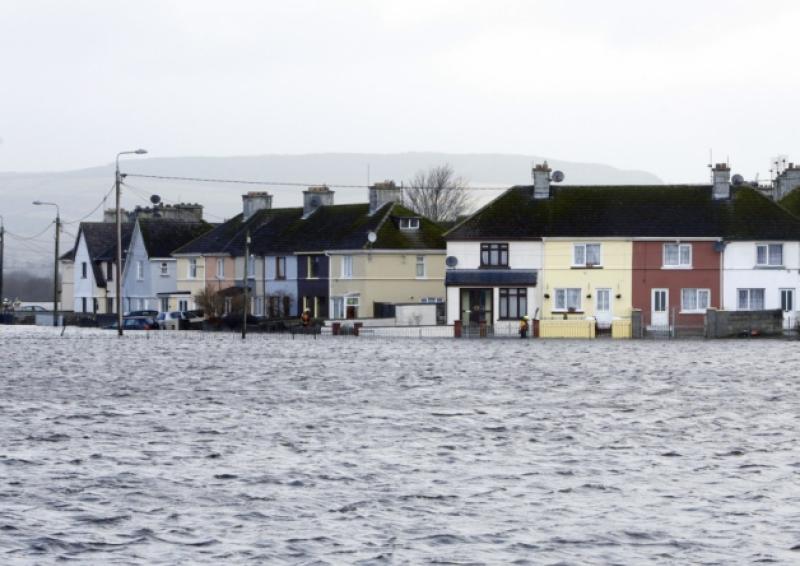 GOVERNMENT ministers and officials are due in Limerick today and tomorrow to assess the cost of the worst flood damage in the city in living memory, which is expected to run to millions of euro.

GOVERNMENT ministers and officials are due in Limerick today and tomorrow to assess the cost of the worst flood damage in the city in living memory, which is expected to run to millions of euro.

Sean Hogan, the national director for fire and emergency management, is due to visit the city this Sunday afternoon, while Minister of State for Public Service Reform and the Office of Public Works, Brian Hayes, is due to visit the worst affected area, St Mary’s Park, tomorrow following the disaster in the early hours of Saturday morning.

Limerick city and county manager Conn Murray told a media briefing in the Strand hotel this Sunday morning that this was a case of “extraordinary unprecedented flooding”, which has affected up to 2000 residents in 300 homes, across 200 acres in the city’s northside.

Many of those have seen their homes completely destroyed by flood damage, and there were emotional scenes in King’s Island this morning as some of those who were evacuated last night returned home to assess the damage.

Mr Murray said 60 people were evacuated according to official records, though hundreds more left of their own accord to stay with friends and relatives.

He said the council will continue to be on “high alert” with further high tides expected this Monday and coming Wednesday.

Some three elderly people were taken to hospital on Saturday, however their injuries are not believed to be serious.

Bernard Gloster, area manager with the Health Service Executive, said the public water supply has been tested and cleared, though he cautioned that flood water should always be treated as being contaminated and urged people to take the necessary precautions to ensure their safety.

Eugene Griffin, senior executive officer in corporate services in Limerick’s local authorities, said even though they had issued an early warning that Storm Brigid was approaching, they had “no idea of the unprecedented” level of the flooding that was to come, “which none of us in our lifetime has ever seen”.

He said the council was “most certainly not” charging the public for sandbags in affected areas, despite such claims on social media sites.

Minister Jan O’Sullivan said she has spoken to Ministers Phil Hogan and Brendan Howlin about the “severity” of the crisis and the “appalling circumstances of people’s lives being totally disrupted.”

Minister O’Sullivan said while a fund already exists for victims of flood damage, she said Minister Howlin has accepted that that fund will have to be increased “to address to problems in Limerick as well.”

She said “major questions” will also have to be asked regarding the future redevelopment of St Mary’s Park within the multi-million Regeneration programme, given its proximity to the River Shannon on a low-lying flood plain.

“The initial priority was to get people to safety, the next priority is to ensure that the banks are as secure as they can be and that people’s immediate needs are met.

“People are then going to turn their attention to what happens next in the future. We want to ensure that at national level there is a full understanding of the appalling, dreadful catastrophe that’s happened because of the water,” she said.

She said it is too early to say what funds will be made available for Limerick, but stressed “we’ll be making the strongest possible case” to bring to national level.

Fine Gael deputy Kieran O’Donnell described the situation in Limerick as a “calamity”.

“When you go down there [King’s Island] you realise the magnitude and the impact that it’s having on people’s lives.

“We’re acutely aware of the sheer disaster that’s happened here, and our colleagues are aware of how serious it is. People will be looked after in terms of proper funding,” he said.

The Army was drafted in to cope with the crisis on Saturday, and still maintained a presence there this Sunday morning, even though flood waters had dropped dramatically.

Council workers have worked in shifts around the clock to pump water back in to the river, at a rate of 1300 gallons per minute. For the first time in years, crews have been drafted in from county Limerick to assist in relief efforts, rather than crews being dispatched to areas such as Foynes in Co Limerick, which was expected to be a greater area of concern at the weekend.

More than 100 emergency response workers were on the ground at a time, between the Army, HSE, Civil Defence, Limerick Marine Search & Rescue, and the Red Cross, amongst many other local volunteers.

The people of King’s Island, and the city and county manager himself, praised the huge swell in community spirit.

Madeline Whelan, whose home was flooded on Vermont Terrace, said many former residents who had been rehoused under the Regeneration programme returned yesterday to assist with relief efforts.

At least seven horses have been reported dead, and many residents said they found their dogs dead in their back gardens on Saturday morning, as they did not realise the power of the storm that was approaching.

Local resident Mike Coady and his horse Peg became internet sensations after he rescued hundreds of people on his horse drawn cart, and waded through the flood waters all day in St Ita’s Street to rescue people from their homes. This single image of community spirit was tweeted more than 110 times, and featured on BBC News last night.