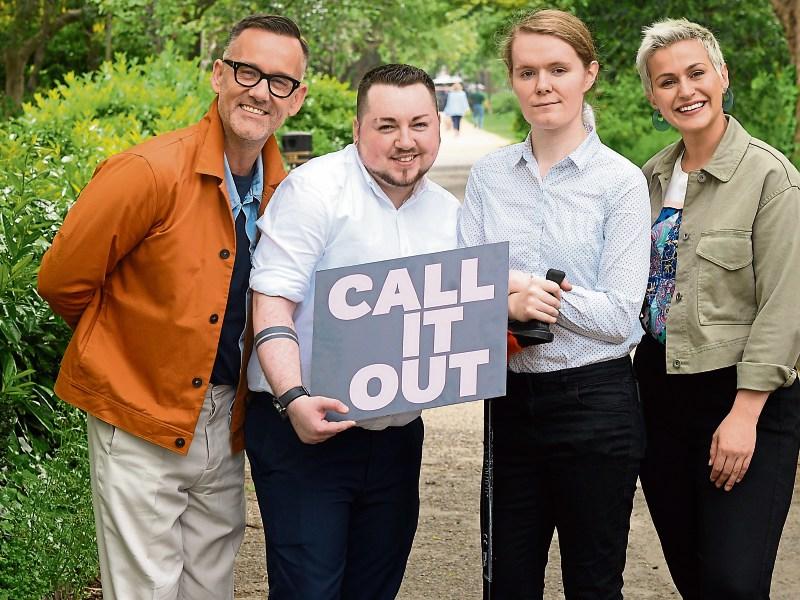 Brendan Courtney, Jack Murphy, Ellen Murray and Maria Walsh launching the Call It Out campaign in Dublin this Monday

NEW research from the University of Limerick has found the Irish public underestimate homophobia, biphobia and transphobia.

A new research survey suggests that while people in Ireland feel positive towards sexual orientation and gender diversity, they underestimate levels of homophobia, biphobia and transphobia.

Conducted by UL’s Hate and Hostility Research Group, the research is a major component of a groundbreaking LGBT+ public education and awareness campaign Call It Out, launched this Monday.

“LGBT+ people still live with a background of homophobia, biphobia and transphobia as a result of their perceived sexual orientation or gender identity,” TENI campaign spokesperson Ellen Murray said.

“For many it feels like it is part of being who they are.”

More than 80% of the 1,395 people who participated in the research survey agreed that lesbians, gay men, bisexual people and transgender people should be free to live their own lives as they wish.

Respondents also expressed high levels of comfort with having LGBT+ people as neighbours.

However, the survey also found that only a minority believe LGBT+ people in Ireland are at serious risk of violence because of hostility towards their sexual orientation or gender identity.

Just more than a third of people, 36%, believe that violence against the LGBT+ community is “a serious problem” in Ireland, contrasting sharply with the reported lived experience of LGBT+ people here.

Research published in 2016 by leading Irish LGBT+ organisations found that 1 in 3 LGBTI people had been threatened with physical violence, while 1 in 5 had been punched, hit or physically attacked in public during their lifetime due to their sexual orientation or gender identity.

“We want to send a clear message that homophobia, biphobia and transphobia are not acceptable,” Ms Murray said.

“To the general public, we ask that you call out homophobia, biphobia and transphobia when you encounter them.”

“To our LGBT+ community, we ask that you share your experiences with people you trust. Talk about it to find support,” she added.

Call It Out is a joint initiative of the Transgender Equality Network Ireland (TENI) and the Hate and Hostility Research Group at UL.

For more information about the campaign visit www.callitout.ie.