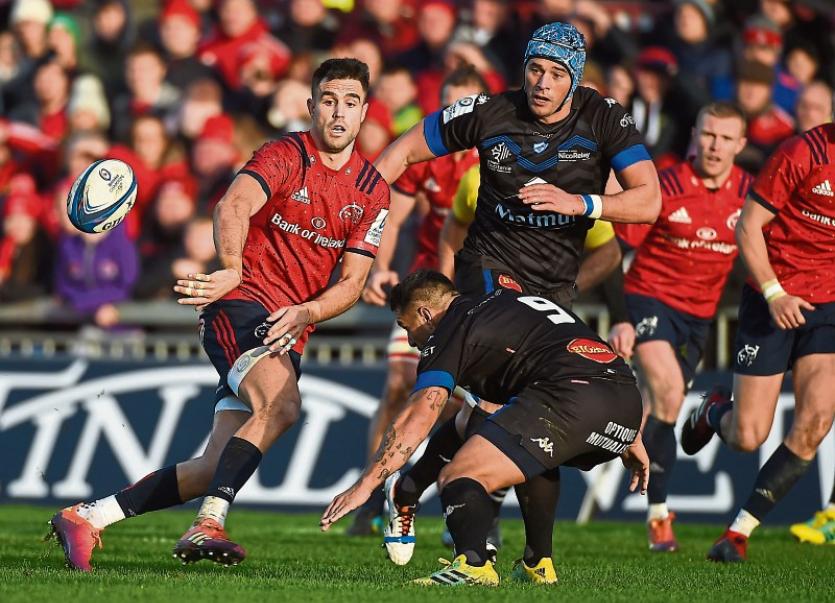 MUNSTER scrum-half Conor Murray is predicting a backlash from Heineken Champions Cup opponents Castres this weekend when the sides renew rivalry at the Stade Pierre Fabre.

Munster, who currently lead Pool 2 of the Champions Cup by three points from Gloucester, sit six points ahead of French champions Castres who they face this Saturday at 5.30pm Irish time.

Johann van Graan's Munster side completed a 30-5 victory over Castres in the first of their back-to-back pool fixtures at Thomond Park on Sunday.

Murray played a key role in setting up two of Munster's three tries on the day.

The two-time Heineken Cup champions will travel to France this weekend without Irish centre Chris Farrell who is ruled out with a thigh injury. Munster are also sweating on the fitness of talented out-half Joey Carbery, who missed the weekend clash with Castres due to a tight hamstring.

Looking ahead of this weekend's Round 4 fixture, influential Munster scrum-half Murray said: “There’ll be a backlash from last weekend. There was a bit of niggle in the game and it probably distracted us a little bit towards the end of the game when we could have pushed on and got a bonus point.

“We drew down there last year and we were lucky at certain times down there but also we had opportunities we could have taken.

“We know it will be completely different, that it will be a much tighter game. You know, it was 13-0 and then we managed to get through a period of them attacking in our 22 and then eventually snuck away and made the scoreboard look a lot better.

“I can see it being a bit tighter down there. Again, their set-piece, their maul, lineout, scrum, especially their scrum they’ll be disappointed and they’ll be doing an awful lot of work on that the week I presume and it will be a lot tougher.

“They’re a proud side. They’re a passionate side and we are too, so I think that sometimes comes together and creates a bit of niggle.

“I suppose it’s what every team can handle at their best and not let it distract you that usually comes out.”

Murray insisted that he would not change his style of play as a result of the neck injury which forced him to miss the opening three months of this season.

“You can't (change how you play). I don't think that would be an option. No. That's a simple answer.

Following Saturday's Champions Cup clash in France, Munster face three interprovincials, away to Ulster on December 21, against Leinster at a sold-out Thomond Park on December 29 and finally away to Connacht on January 5.