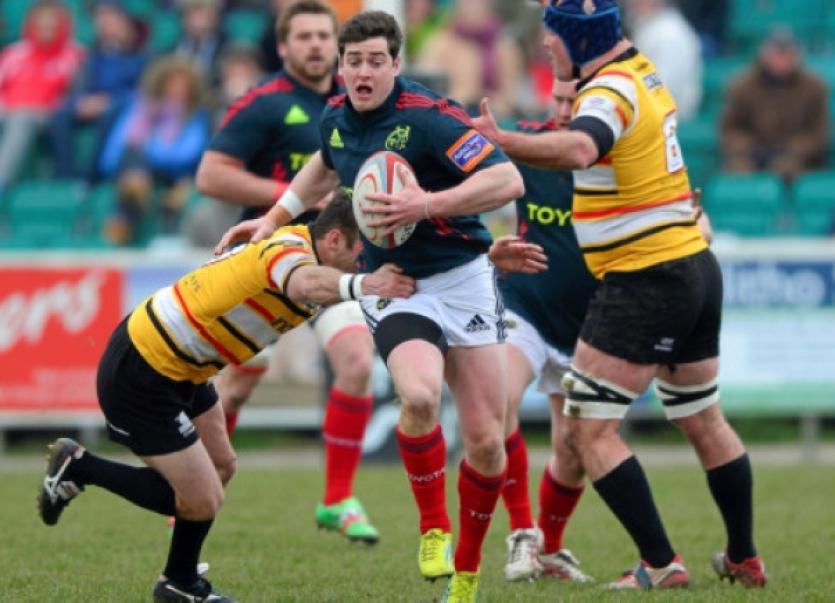 LAST week, dynamic winger Ronan O’Mahony reached a milestone in his hugely promising rugby career when marking his full Munster debut by bagging a try in the RaboDoirect PRO12 clash with the Dragons at Rodney Parade.

LAST week, dynamic winger Ronan O’Mahony reached a milestone in his hugely promising rugby career when marking his full Munster debut by bagging a try in the RaboDoirect PRO12 clash with the Dragons at Rodney Parade.

It is apt, then, a week on, that O’Mahony should return to a more familiar stomping ground, Garryowen FC’s Dooradoyle base, this Friday night to line out for the province’s ‘A’ side in their glamour British and Irish Cup semi-final clash with Leinster A (7.30pm).

O’Mahony has been a leading light in the Munster ‘A’ side’s march to the last four stage of the B&I Cup where old foes Leinster provide the opposition. It was O’Mahony dramatic late try which helped holders Munster A secure a thrilling quarter-final win over Cornish Pirates in their previous outing. And on the back of those eye-catching performances, it was no surprise to see Rob Penney give the 23-year-old top class finisher his bow in the PRO12 last Friday night.

When Academy player O’Mahony featured for Munster against the Dragons, he was completing a remarkable double for the family this season. Older brother Barry featured for Rob Penney’s side in their early season RaboDirect clash with Edinburgh at Murrayfield.

Ronan O’Mahony admits he was excited to get the call-up to the senior side last Friday.

O’Mahony explained “Simon Mannix (Munster backs coach) came up to me before the team meeting last week and told me I would be involved (against the Dragons).

“Obviously, I was thrilled to hear it. It was my first run out in the Rabo and huge for me.

“I was excited to get the call up and pull on the Munster jersey. It was huge for me, what I have been working towards. Unfortunately, the result didn’t go our way.

“I was delighted to get a try. When you are playing alongside the likes of Denis Hurley and Johne Murphy, who put me away with a great pass, it makes it easier.

“It was great that my brother Barry is also involved in the Munster squad again. My parents are very proud. The fact both of us have development contracts for next season gives us an opportunity to develop as players and really push for a place in the team as well.”

“My rugby playing began with Garryowen. I have been involved in the club for as long as I can remember. I came up through the ranks,” O’Mahony said.

“Playing for Castletroy College played a huge part in my development. I played in nearly every position across the backline while I was there. That stood to me. I had a really good feel for the different positions.

“Unfortunately, we got knocked out in the quarter-finals is my year (2007) playing Munster Schools Senior Cup. We lost to St Munchin’s on the back pitch at Thomond Park. The following year, they went on and won the Cup which was great. When I left school, I continued to learn my trade with Garryowen. I played U-21s at first, but the senior side had a few injuries and Garryowen were in the semis of the AIL and I managed to get a start on the wing against Shannon in Coonagh. Unfortunately, we lost.”

O’Mahony says the injury free run he has enjoyed in recent times has been key to his improvement.

“The first year or two in the Munster Academy weren’t as good as I would have liked them to be. I was playing senior rugby with Garryowen, but I had a couple of injuries,” he pointed out.

“Last year and this year again, I have managed to stay mainly injury free, thank God. I am really enjoying my rugby.

“The British and irish Cup is a very important competition for younger players in terms of their development. It gives us the chance to play against big English Championship sides, such as the Cornish Pirates who we played two weeks ago in the quarter-final. They are really tough games and they really stand to you.

“We have played Leinster twice this season and managed to beat them twice. It has been mentioned about how difficult it is to beat the same team three times in the one season, especially when it comes to a very good side like Leinster. We are going to have to find an extra 10% or 20% on Friday night to get ourselves over the line.

“We want to finish this season on a high. That is why this weekend is so important. for Munster, every time you pull on the red jersey, whether it be for the seniors or the A team, you are always looking to impress, always looking to catch the coach’s eye, show him what you have to offer.”