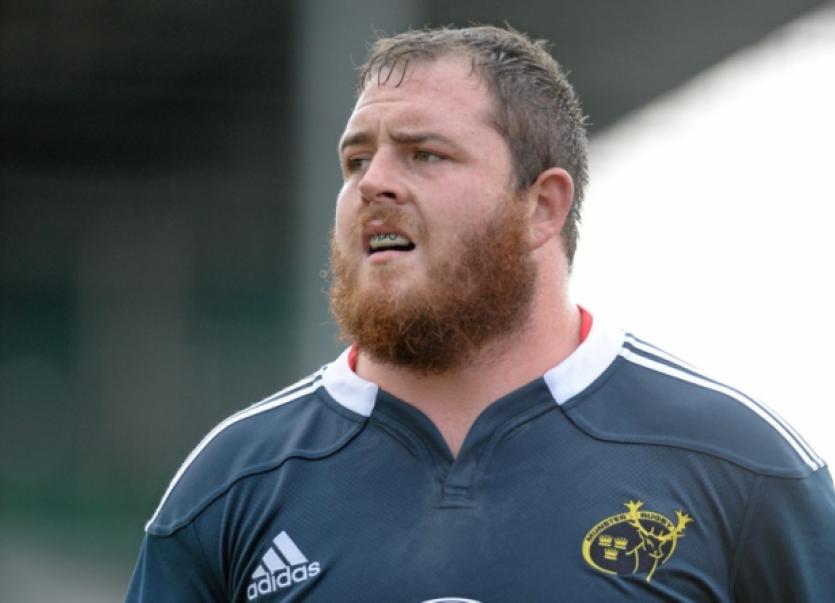 LIMERICK-born prop Alan Cotter left Munster at the end of last season to further his career at French Pro D2 side Provence Rugby. The 29-year-old tells Leader Rugby Correspondent Colm Kinsella about winning his battle with long-term injury and his exciting new life in the South of France.

LIMERICK-born prop Alan Cotter left Munster at the end of last season to further his career at French Pro D2 side Provence Rugby. The 29-year-old tells Leader Rugby Correspondent Colm Kinsella about winning his battle with long-term injury and his exciting new life in the South of France.

Why did you decide to leave Munster for French PRO D2 side Provence Rugby?

Alan Cotter: “I had been in the senior set-up with Munster for three years. I decided I wanted something different. I needed to get more exposure, more game time. I turned 29 in September.

“They say these are your best years as a prop and I want to do it playing rather than just training.”

You had experience playing in England before with London Irish and Bath?

AC: “Those previous stints I had in England were really beneficial. They really laid roots. I knew from playing with them teams that I am able for that level. When I came back to Munster I got a few caps here and there, but I am ambitious.

“Those caps weren’t enough for me. I wanted more. I wanted to be a starter and I felt this was definitely the way to go.

“You would meet your agent three or four times a year and have a chat. You reevaluate yourself and see where you want to go. We both came to the conclusion that it was time to move. He has your (video) clips and he has contacts in France and puts them out.

“The club wanted to meet and I went over. They told me what they wanted. They made me feel very welcome, made it obvious they wanted me and made me feel that I would be good for their plans. I went from there. They have great plans for the future. They were called PARC. Now they are called Provence Rugby and the head coach id the former France and Toulouse number eight Christian Labit. The clubs is situated about 15 to 20 minutes drive from Marseilles.

“The club changed its name, changed its crest and amalgamated for this season. They got promoted to PRO D2, the second division in France. I was hoping they would get promoted from the day I first heard they were interested in signing me.”

How are you enjoying life with your new club?

AC: Climate change my biggest fear. When I arrived in July it was 36-40 degrees daily but credit to the coaches we trained very early in the morning and late evenings.

“The language was my second biggest fear. Before I left Ireland I did a couple lessons and my girlfriend made a list of rugby specific terms, which has helped me a lot. I am taking classes but it’s still a work in progress.

“I am really enjoying it. You wake up every morning and don’t need to look out the window to know that it is sunny. I’ve settled in nicely and the fact my girlfriend is with me makes it easier. It was a bit difficult the first couple of weeks, because I was in rehab for my injury. Now I’m back playing and I am around the group daily, which is great because I am slowly picking up French thanks to the lads. I’m as settled as can be.”

It must be a relief to be injury-free again after your problems of last season?

AC: “In total I was out for 10 months and had two surgeries. On paper it may not seem that long but mentally those last 3 months were tough. Sometimes I wondered if I would ever play again. I knew I would never be 100% pain free, so about five weeks ago we took a gamble and tried a few scrums.

“The next day there was no pain so then we started to introduce some contact drills, tackling, etc, and from there I was able to resume full training.”

Having your former Munster team-mate Denis Fogarty with you at Provence must help with settling in?

AC: “Yes, Denis is a good craic I have known him from when he played with Munster. We are able to have Irish banter but the French lads can’t understand anything we say.

What are the club’s expectations for the season ahead?

AC: “We haven’t had the best of starts, like I said there are around 16 new players on the team, which got promoted last season, so we are just trying to figure out the best combinations.

“We lost our first three games but won the last match against Biarritz to end the first block of games. We have a four week break from games now, so we are using this time to work on our game plan/structure, skills and fitness. When the next block we’ll play Dax away.

“As a ‘glass half full’ type of person I would love to say a promotion play-off position is our ambition for the season, but to be realistic mid-table/remain in ProD2 is perhaps closer to the mark.”