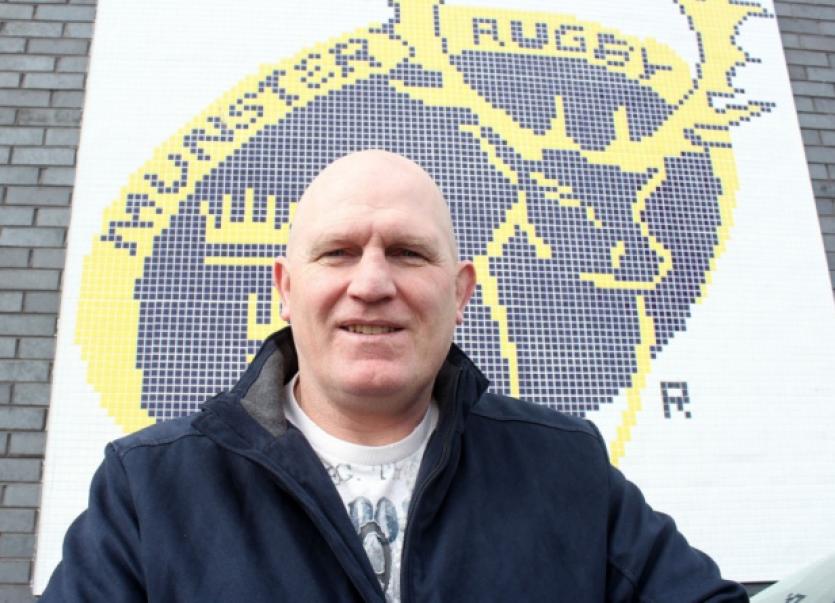 GER Earls, father of Ireland star Keith, speaks to Limerick Leader Rugby Correspondent, Colm Kinsella, about the anxiety of watching his son play, dealing with verbal abuse from supporters and how Jonah Lomu influenced the Munster utility back at the 1995 World Cup.

GER Earls, father of Ireland star Keith, speaks to Limerick Leader Rugby Correspondent, Colm Kinsella, about the anxiety of watching his son play, dealing with verbal abuse from supporters and how Jonah Lomu influenced the Munster utility back at the 1995 World Cup.

When did Keith first show an interest in rugby?

GE: “Keith first started playing at Thomond, probably U-8s. I was involved with the club before I moved to Young Munster. The club had a great set-up and Tony Cronin called to the door and said he felt it was time for Keith to start playing a bit of rugby.

“He was on a very good team. They won everything growing up at under-age. John Broderick took him over at U-12s and from there on they won league and cup.

“I remember when I was doing pre-season training myself with Young Munster out in Derryknockane during the summer months Keith would come out with me. There were three or four big fields out there. Then he started coming to games and he was always around the dressing room.

“Keith always wanted to be a forward, always wanted to play wing forward. He had it in his head. But the coaches were short a few backs and they looked at moving Keith out there. He took off from there.

“John Broderick brought him out to St Munchin’s College at 16 years of age.

“When he moved out there, it started getting serious. Munster Schools were showing an interest in him.”

Going down the professional route?

GE: “Keith was fairly young when he got into the Munster Academy. He was offered his first his first contract about eight months after he had started his training to become an electrician.

“Keith was very young. I was kinda a bit iffy about it at the time. I wanted him to finish out his course a bit. He was so into the rugby, you couldn’t stand in his way, really.”

What are your first memories watching the Rugby World Cup with Keith?

GE: “The 1995 World Cup in South Africa is the one which comes to mind. We had a mobile home in Fanore, Co Clare at the time and we went there during the summer. Jonah Lomu, the All-Black winger, was the big star of that World Cup. It had a big impact on Keith.

“The game went professional at that time. That ‘95 World Cup and being away on holidays in Clare would have been his first taste of that World Cup.”

As a father, are you able to enjoy watching Keith when he is playing?

GE: “I never enjoy a game watching him play. I can’t sit back and watch the rugby side of a game any more. Even a few weeks ago when he got injured at the Aviva Stadium against Wales, rugby doesn’t come into it.

“Myself and Sandra (Keith’s mother) were sitting in the stadium that day and I feared the worst. If Keith came through the game fine and didn’t get selected for the World Cup, so be it.

“I have to say with the IRFU that day they had us down to Keith in the medical room at the Aviva Stadium within five minutes. When I walked into the room, it is like a small hospital. The facilities are first class. It reassures you and he was being well looked after.

“Concussion is a big issue in rugby today for good reason. It is very hard to watch the game and enjoy it if your son is playing. You just hope he comes out of it ok. Nothing else matters.

“For himself, Edel and their two kids, they sacrifice a lot. He was a year and a half out with injuries and he couldn’t shake them off. It was one thing after another. It was getting him down a bit.

“He was wondering if it was time to hang up the boots. He has a young family, two young daughters. He said at the start of the year when he got back fit, he wrote down his goals and one was to make the World Cup squad. He had to work very hard to achieve it. People wouldn’t see that work and it is not just Keith, the rest of the players as well. The sacrifices they make family wise, Edel and the two girls, they make a lot of sacrifices.”

How do you deal with abusive comments from supporters in the crowd?

GE: “The players get a lot of flak from the supporters watching too. There could have been times I would have been arrested out of grounds if I reacted to something said by a spectator the way I should have. You have to bite your tongue.

“People think being a professional rugby player is a great lifestyle and an easy lifestyle. For the players themselves, they go through an awful lot.

“When it gets to a point, I stand up and let them know who I am, who they are abusing. You get a couple of lads there and they are on the beer and they think they have a God given right to abuse players and their backgrounds.

“At one match in particular, a guy was on about Keith being from Moyross, being a ‘scumbag’ and all of this.

“I just stood up and said:, ‘I reared that young fella out there and he is no scumbag.’ It put him back in his place a small bit. The same fella apologised to me later.

“Keith is very proud of where he comes from, he has bore and reared in Moyross. That is one thing about him.

“I remember a few years ago, when the French international Imanol Harinordoquy was playing in a match, his father ran out onto the pitch and and tried to punch a Bayonne player. You might feel like that sometimes, but you can’t.

“I have learned to deal with the verbal abuse. Ten or 15 years ago, I wouldn’t have been able to deal with it as well, but you learn as you go on.”

Are you planning to travel over to the UK for Ireland’s World Cup pool matches?

GE: “Myself, Sandra and Jenny are heading over on Thursday morning. We had no holiday this year. We had a Communion in the family, so we decided to hold off and see if Keith got picked for the World Cup, we would head over.

“We will take in the first game against Canada, come home and work away and then see how Ireland are getting on. We could head out again if they get to the knock-out stages.”