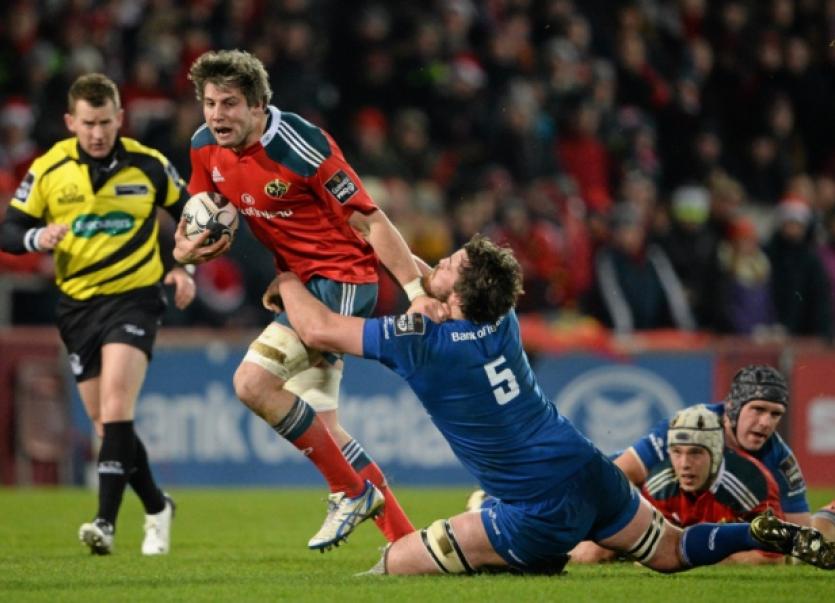 MUNSTER completed their first home and away double over Leinster in the Guinness PRO12 since 2009 after scoring a comprehensive 28-13 win over their fierce rivals at Thomond Park on Stephen’s Day.

MUNSTER completed their first home and away double over Leinster in the Guinness PRO12 since 2009 after scoring a comprehensive 28-13 win over their fierce rivals at Thomond Park on Stephen’s Day.

First half tries from Man of the Match CJ Stander and winger Andrew Conway, together with a second half five-pointer from replacement Dave O’Callaghan, helped Anthony Foley’s side end their three-game losing run in all competitions in emphatic fashion. Out-half Ian Keatley kicked 13 points as Munster claimed a deserved victory in front of a sell-out attendance of 25,600 to add to their Aviva Stadium victory over last October.

Despite the absence of several big-name Irish internationals from both sides, this was a fiercely competitive, compelling derby clash played in dry, if blustery conditions. Munster dominated the collision area and bossed the breakdown sector, giving the home side the opportunity to keep the scoreboard ticking over regularly.

Back-row Shane Jennings scored Leinster’s try late on, while out-half Ian Madigan bagged eight points with the boot. Leinster cause was not helped by the sin-binning of winger Darragh Fanning on 53 minutes. While Munster denied Leinster a losing bonus point, the home side didn’t quite manage to secure a try bonus point in a frantic final quarter.

Next up for Munster in the Guinness PRO12 is a trip to the Sportsground in Galway to face Connacht on New Year’s Day, 5pm.