Munster’s CJ ready to Stander up and deliver 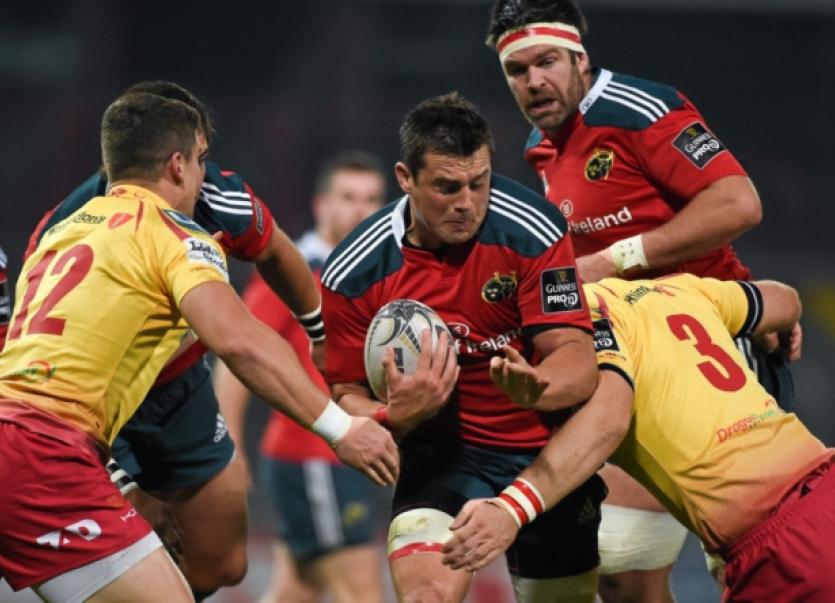 Munster will be desperate to make a winning start in the inaugural Champions Cup as Pool 1 also includes English Premiership heavyweights Saracens and Top 14 side Clermont Auvergne.

Stander, who was Man of the Match in Munster’s Guinness PRO12 victory over Scarlets at Thomond Park last Friday night agrees that competition for starting places in Munster’s back-row remains fierce.

Stander said: “It was a good game (v Scarlets). As I just said, the competition in the back-row is tough. I just want to keep my head down and work hard.

“When the team comes out this week, hopefully I am in there. If I am not, I am going to support the team. It is a big week. Everyone has to be on edge to perform this weekend.

“There are a lot of great loose forwards at Munster. It is tough to keep that jersey. You just have to play well all the time. Overall, it was a good performance against Scarlets. You have to perform week in and week out in this position.”

South African-born Stander has made an impressive start to the season and is thriving in Munster’s current game-plan where he gets to carry a lot of ball.

“I watched a few Munster games when I was a bit younger. I remember them playing a quite forward-orientated game. But it is good to carry the ball.

“My work rate for myself picked up a lot during the season, this season especially. In the first two seasons I tried to work on that and it is coming through this season. The coaches Axel (Anthony Foley), Cossie (Ian Costello) and Squeaks (Brian Walsh) gave me a lot of tips - and Fla (Jerry Flannery) also. For me, carrying is a strong point. It is good to get the ball in my hand and carry forward.”

Munster’s Pool 1 tie with Sale Sharks is live on Sky Sports 2 from 12.30pm on Saturday.

Head coach Anthony Foley agrees training cranks up a gear in the week of a big European tie.

“I think everything cranks up when you start Europe. People understand the importance of every game in Europe and consequences of both the wins and losses, close losses and big wins. Everybody understands when you get to Round’s 5 and 6 it is all the points you accumulate put you in to different scenarios. There is a level of intensity that is brought to day 1 of European Cup week that isn’t in any other week.

While Munster beat Scarlets in the PRO12 on Friday, night, Sale Sharks suffered a heavy defeat to Northampton Saints at Franklin’s Gardens in the Aviva Premiership on Saturday.