Fiona Doyle - From Limerick to the Olympics 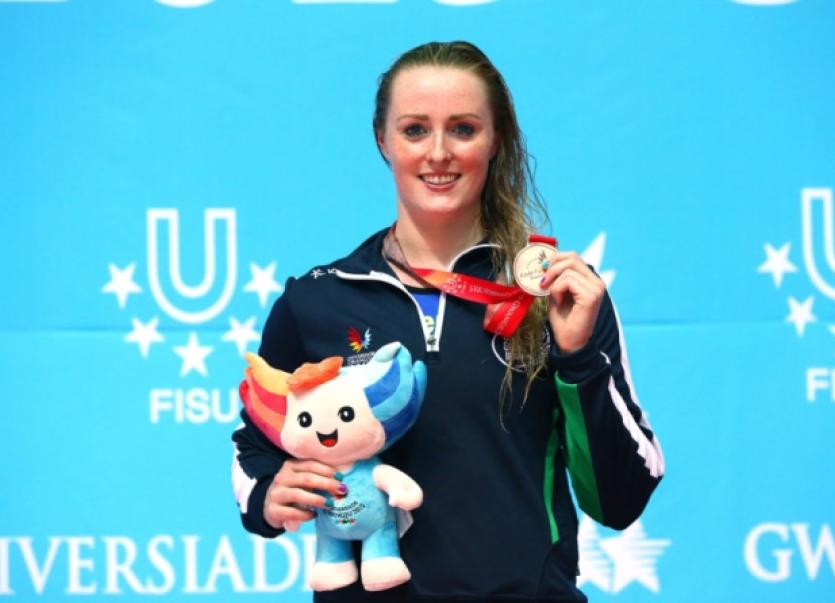 Colm Kinsella tells the story of Limerick swimmer Fiona Doyle, who this week booked her place in the 2016 Olympics in Rio de Janeiro

Colm Kinsella tells the story of Limerick swimmer Fiona Doyle, who this week booked her place in the 2016 Olympics in Rio de Janeiro

Limerick swimmer Fiona Doyle celebrated her qualification for the 2016 Rio de Janeiro Olympic Games by winning a bronze medal at the World University Games in South Korea this week.

Twenty three-year-old Doyle from Raheen at the World University Games in Gwangju claiming bronze in the 100m breaststroke final - Ireland’s first medal of the Games.

Doyle secured the ‘A’ qualification time in the semi-final of the 100m Breaststroke clocking 1:07.67 which ranked her fourth going into the final.

The time was just one hundredth of a second off her Irish senior record of 1:07.66 from the final of the same event in 2013 where she won silver.

The University of Calgary student smashed that time swimming 1:07.15 to take the bronze medal in the highly competitive final.

“Getting the Olympic time in the semi-final was great as it meant I could get it out of my head and concentrate on swimming as fast as I could.

“I’m happy with the medal, another colour might have been nicer, but it was over half a second faster than my best time so I’m pleased with that.

In May, Fiona Doyle was named High Performance Athlete of the Year for the second year running at the Swim Ireland Annual Awards in the Citywest Hotel.

Doyle also had an outstanding year in 2014 and won the award based on her excellent performances, in particular her seventh-placed finish in the 50m breaststroke final at the European Championships in Berlin, when she clocked 31.37 seconds for the event, the first time she had competed in a major international final.

In a previous interview with the Limerick Leader, Fiona Doyle explained that it was while watching the swimming events at the 2004 Olympics in Greece that she set her sights on becoming an Olympian.

Fiona Doyle said: “After watching the 2004 Olympics, in Athens, I immediately told my parents that I wanted to compete at the next one.

“Back then, I was ranked number six in Ireland, but had no real idea about what elite swimming actually involved. My parents simply told me ‘of course you can’.

“In retrospect, I do not really think that they fully believed me at that time. However, the following summer I attended my first big international event, the European Youth Olympic Festival (2005), and came fourth. I was the only Irish person to make a final that year and the first in a very long time.

“After that, I knew swimming was for me and my career took off. Today, my main events are the 50m, 100m and 200m Breaststroke.

“There are ups and downs in swimming, like any other sport. No athlete, at an elite level, can truly say that reaching the top is easy or that it has been a fun ride all the way.

“You have to go through many disappointments, and make many sacrifices, to reach your goals. Without the help and support of my family, friends and coaches (who have mopped up my tears) I would not be where I am today.”

Doyle has come a long way in a short time. No surprise then that she nominates ‘Pain is Temporary - Pride Lasts Forever’ as her Inspirational Quote’ on her Swim Ireland homepage profile.

Fiona Doyle recalled: “When I was attending Crescent College Comprehensive, I was training four mornings a week, up at 4.30am and heading to the pool.

“Then it was a case of going straight from the pool to school and then back to the pool after school. Then you fitted in study.

“We were training five evenings a week. It was 28 hours in all - a bit mental.

“But that is what we needed to do and we were happy enough to do it. We had a fantastic group there at the time. It didn’t really seem like sacrifices to us .

If that means cutting back on the number of times I go out or choose swimming over going out, then that is what I have to do. I only have such a short period of time to swim. Now is the time to do it.”

Fiona Doyle was born into a family steeped in the sport of swimming.

It was the start of her teenage years, that Doyle realised she had the potential to compete at an elite international level.