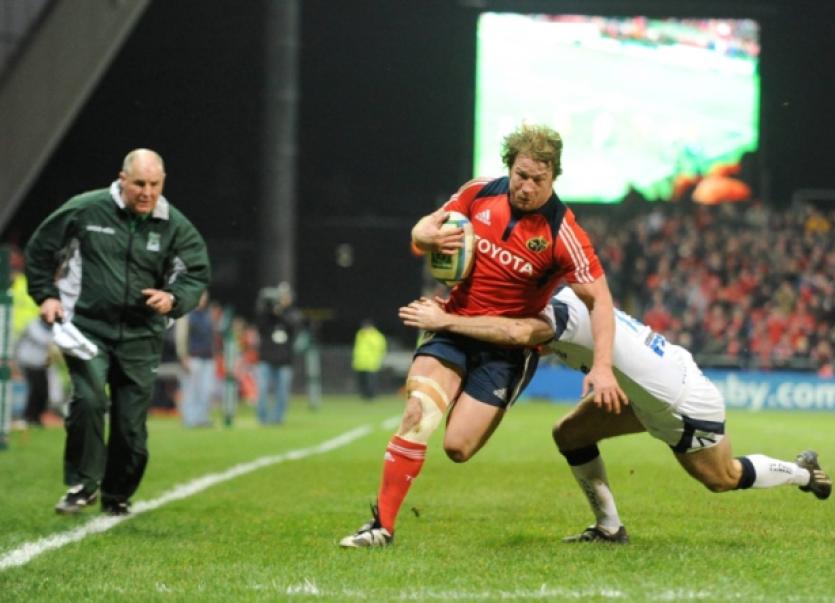 MUNSTER suffered surprise opening day away defeats in European competition for the past two seasons, but such a setback this Saturday is likely to prove a near fatal blow to the province’s hopes of progressing to the knock-out stages of the inaugural European Rugby Champions Cup.

MUNSTER suffered surprise opening day away defeats in European competition for the past two seasons, but such a setback this Saturday is likely to prove a near fatal blow to the province’s hopes of progressing to the knock-out stages of the inaugural European Rugby Champions Cup.

Munster managed to survive opening weekend defeats to Racing Metro in 2012 and Edinburgh Rugby 12 months ago and still manage to make the quarter-finals of the old Heineken Cup.

However, defeat away to Sale in Saturday’s opening round tie is likely to prove more costly to the province’s aspirations.

In a teak tough pool which contains three of last season’s European Cup semi-finalists in the guise of Munster, Clermont Auvergne and Saracens, there is little margin for error. With away day wins crucial in deciding which side or sides progresses from Pool 1, right now Munster’s meeting with the Sharks appears the best opportunity for Anthony Foley’s side to record an away win in the competition.

Sale have won just two of their six Aviva Premiership fixtures this season to lie tenth in the table. The Salford-based side suffered a 43-10 thumping away to Premiership leaders Northampton Saints last weekend.

Munster will, however, be mindful of the fact that Sale recorded an impressive home win over Wasps in their previous league outing. Nonetheless, Saturday’s fixture represents an excellent opportunity for Munster to record an away win.

The bookmakers’ also agree making Munster 4/9 favourites to win Saturday’s tie at AJ Bell Stadium, with Sale on offer at 7/4.

Munster haven’t always played well with an early kick-off away from home in European competition.

Saturday’s 1pm start brings its own challenge, but head coach Anthony Foley says the team is preparing for the challenge by changing meal times as well as going to bed and rising earlier.

Anthony Foley said: “It’s about making sure of our preparation for a one o’clock kick, that the 1pm start time it’s not a shock.

“We’d have talked about it to the boys that 7.30am can’t be the first time on Saturday morning when they have breakfast this week, they have to have it four or five times during the week.

“They have to be used to eating at that time and holding down the food and be able to train on the back of it. The boys have to get an enormous amount of food into them before 1pm so they can sustain an effort in the game.

“It’s that, it’s sleep, it’s everything. It’s the little things that you mightn’t consider going into the game that are the most important things on the match day, how you have eaten, how you have slept and that leads to guys feeling good in the pitch. What you want is fellas who are feeling powerful on the pitch, with a complete knowledge of what their task is.”

THE confidence Munster players gleaned from their excellent away win over Leinster in the Guinness PRO12 cannot be overestimated.

It was a huge boost to the players and also to the new management team. Munster were never likely to be able to replicate the same level of intensity and physicality in their PRO12 fixture with Scarlets last weekend. Munster will travel to the AJ Bell Stadium with quiet confidence. They have, for the most part, managed to avoid the plague of injuries Leinster have experienced in recent weeks.

Sale’s recent run of form will hardly put the fear of God into Munster players this weekend although the Sharks are certain to carry far greater bite in front of their home fans than they did in their limp performance away to Northampton Saints last weekend.

You Get What You Deserve

MUNSTER head coach Anthony Foley is better placed than many to provide an astute insight into what it takes to be successful in Europe, given his decorated playing career as well as his time as part of the Munster coaching set-up.

Foley said: “I suppose I am one of the few who can say it, since I have been involved in this competition at the start. You get what you deserve out of this competition. You slip up one day and you will be turned over and you have got to be on your metal. You have to understand that on any given day because of the quality of the opposition and because of the expectations of the player.

“Because it is a massive competition, I envy the players. I envy the fellas who are playing it for the first time because they don’t know what is in front of them. It is a magnificent competition with a lot of expectation.”

THE importance of Munster getting off to a winning start this weekend is clear when you consider the demanding fixture schedule which lies ahead of the province in Europe before Christmas.

Munster host Saracens - currently second in the Aviva Premiership and finalists in the Heineken Cup last season - at Thomond Park on Friday, October 24 at 7.45pm.

In rounds three and four in December, Munster face back-to back fixtures against Clermont Auvergne. Playing the first leg at home should be an advantage to Munster, especially if the French side lose away to Saracens this weekend. And the bookies’ fancy Sarries to prevail, pricing them up at 4/9 to win Saturday glamour tie.

It is always dangerous to get too far ahead of yourself in European competition. But should Munster beat Sale and Saracens, then Clermont at home in December, then the French side could be all but out by the time the return leg arrives. Simple as that!