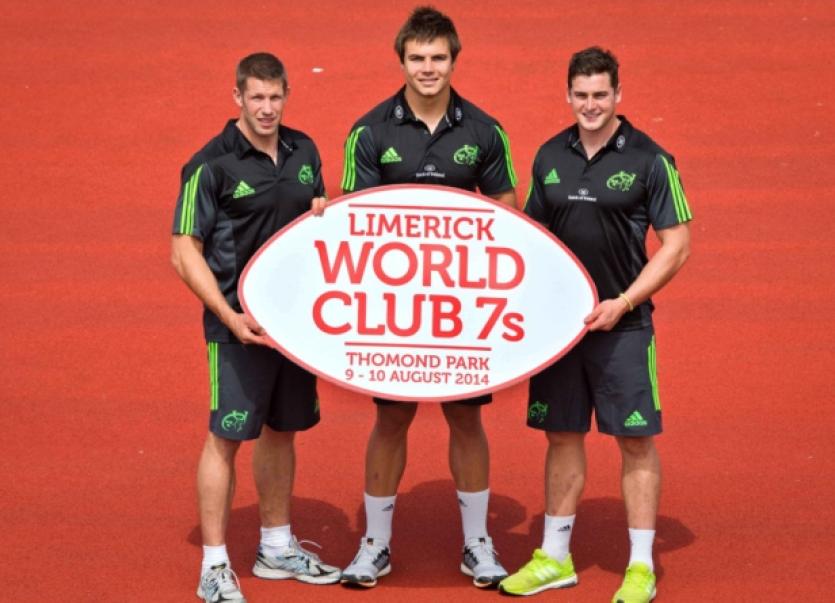 MUNSTER’s Ronan O’Mahony is eagerly looking forward to pitting his wits against some of the world’s top club sides in next weekend’s Limerick World Cup 7s tournament at Thomond Park.

MUNSTER’s Ronan O’Mahony is eagerly looking forward to pitting his wits against some of the world’s top club sides in next weekend’s Limerick World Cup 7s tournament at Thomond Park.

Twelve teams from around the world will showcase some of the biggest names in club and provincial rugby from both Northern and Southern Hemispheres will compete in the inaugural World Club 7s in Limerick on Saturday and Sunday.

Munster, under the careful watch of former Munster and Ireland 7s player McMahon will face Moscow Saracens, San Francisco and Fiji’s Davein the group stages of the event.

Exciting back three player O’Mahony says the experience of playing 7s will benefit him while playing with Munster in the 15-a-side version of the game next season.

“With only seven players on each side, there is obviously a lot of space to work with. When you do have the ball, you can open up your legs a little bit and express yourself,” Limerickman O’Mahony said.

“We have played games between ourselves at Munster, integrated the 7s into training. While the lads might be doing their warm-up, we could be getting the ball moving across the pitch, working on a couple of moves.

“When we all go to do our conditioning block, the 7s panel breaks away and plays games, working into full-on coming into the game.

“I have been watching quite a bit of 7’s rugby, including the Commonwealth Games. It’s an unbelievable standard. It gives the players a licence to express themselves, show what they got.

“I would have played a couple of 7s tournaments, as would Gerhard (van den Heever) and a few Academy lads. For Munster, it is a small bit going into the unknown. We have played a few tournaments here and there, but nothing major. I think the Limerick 7s will be huge for us, great for the city and everyone involved.”

The Limerick World Club 7s festival will see a full schedule of 14-minute matches running over two days. The pool matches will all take place on Saturday with the next stage and ultimately the winning club emerging from the Sunday play-offs.

The on-field action is due to begin on Saturday at 11.15am with Auckland facing New York.

Tickets can be purchased for the event from €15 on www.ticketmaster.ie, with day tickets, weekend passes and family tickets all available.

For more details on the event see www.worldclub7series.com or through social media www.facebook.com/WorldClub7Series and @WorldClubSevens on Twitter.