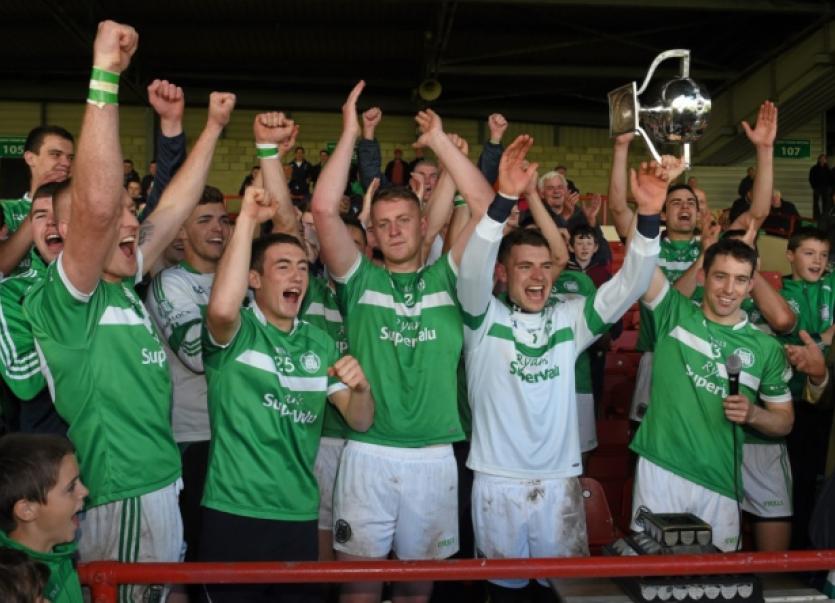 KILMALLOCK were crowned Limerick SHC winners this Sunday afternoon with a 1-15 to 0-14 win over Na Piarsaigh in the Gaelic Grounds.

KILMALLOCK were crowned Limerick SHC winners this Sunday afternoon with a 1-15 to 0-14 win over Na Piarsaigh in the Gaelic Grounds.

It is an 11th ever Limerick title for the south Limerick men, who in the process dethroned the Limerick and Munster club champions.

From start to finish, the men in green looked the hungrier and more focused side in front of a small attendance of just 2,910.

And, the success came despite having a man sent-off in the final minute of the first half.

The win books a Munster club semi-final for Kilmallock against Cork champions Sarsfields in Kilmallock on November 9.

Na Piarsaigh won the toss and opted to play against the wind.

With the elements to their back, Kilmallock laid a firm foundation for victory with a 1-9 to 0-5 interval lead.

They were helped on their way with a third minute Eoin Ryan goal.

Captain Graeme Mulcahy and Man of the Match Kevin O’Donnell were also early scorers as Kilmallock opened a 1-3 to 0-1 lead after just five minutes.

Wing back O’Donnell was inspiration in the opening half with three long range points utilising the wind to perfection.

All over the field Kilmallock were on top and they brought an intensity that Na Piarsaigh couldn’t match.

Perhaps their battle-hardened route to the final with slender victories over Adare and Doon stood to them because they looked a sharper outfit against the red hot favourites from Caherdavin.

William O’Donoghue and Alan Dempsey replied to the early dominance but when they did ask questions of The Balbce, they hit back with scores of their own to maintain the advantage.

In unfavourable conditions of wind and rain, the first half especially was end-to-end and the first 12 scores came from play.

It was the 21st minute when Kilmallock’s Eoin Ryan had the first score from a free. That had his side 1-7 to 0-5 clear.

Shane Dowling had just hit points for Na Piarsaigh but still there was no momentum for the Light Blues.

Two points from Graeme Mulcahy was to end Kilmallock to the half time dressing room with seven points to spare.

But they were dealt a blow in the final minute of the half when wing back Liam Walsh was sent off with a straight red card after striking out at Kevin Downes, who received a yellow card for an initial late challenge.

Such was the Kilmallock dominance in that opening half that they had hit nine wides, compared to just three for the reigning champions.

Against the elements and down a man numerically, they could have lived to regret that inaccuracy but it was not so as they turned in a dominant defensive performance in the second half to ensure no dramatic comeback.

Kevin Downes did had a Na Piarsaigh point within 20-seconds of the restart but Gavin O’Mahony hit back instantly.

David Dempsey and centre back David Breen reduced the lead as Na Piarsaigh found a greater share of possession with ‘free man’ Ronan Lynch dictating much from the defensive.

But Kilmallock stood firm and midway through the second half it was 1-12 to 0-9.

Indeed the lead was out to seven points again entering the final 10-minutes.

Just then Na Piarsaigh were also reduced to 14-men when Kevin Ryan was shown red.

But his side kept battling and Ronan Lynch lineball and ‘65) and Adrian Breen had points on the trot to lead four between the teams with three minutes to play.

But the goal they needed never came - Barry Hennessy in the Kilmallock goal denied Adrian Breen in the 55th minute and Peter Casey in the 59th minute.

Kilmallock actually finished with 13-players with full back Mark O’Loughlin sent off in the 60th minute for a second yellow card offence.

In injury time Dowling stood over a 21m free but that too was saved and the Daly Cup was on its way to Kilmallock for the third time in the last five years.